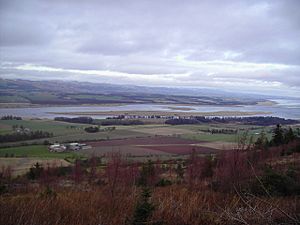 Mugdrum Island lies in the Firth of Tay, offshore from the town of Newburgh, Fife, in the east of Scotland.

Mugdrum's name is from muc-dhruim, the Scottish Gaelic for hog-back. The name is also applied to Mugdrum House, to the west of Newburgh in Fife, on the south coast of the Tay opposite the island.

The reeds were once harvested for thatching and for protecting potatoes during transshipment. Until 1926, a 50-acre (200,000 m2) farm grew cereals, potatoes and turnips in the island's alluvial soil. It is now a nature reserve under the stewardship of the Tay Valley Wildfowlers' Association.

The Laing Museum in Newburgh preserves the stuffed body of a two-headed kitten born in the 19th century on Mugdrum.

All content from Kiddle encyclopedia articles (including the article images and facts) can be freely used under Attribution-ShareAlike license, unless stated otherwise. Cite this article:
Mugdrum Island Facts for Kids. Kiddle Encyclopedia.