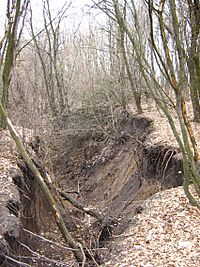 A gully in Kharkiv oblast, Ukraine. 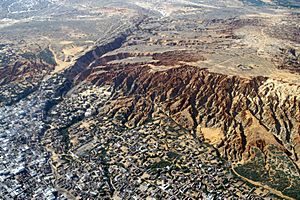 A gully is a landform created by running water, eroding sharply into soil or other relatively erodable material, typically on a hillside. Gullies resemble large ditches or small valleys, but are metres to tens of metres in depth and width. When the gully formation is in process, the water flow rate can be substantial, causing a significant deep cutting action into the substrate.

The earliest known usage of the term is from 1657. It originates from the French word goulet, a diminutive form of goule which means throat. It is possible that the term is connected to the name of a type of knife used at the time, a gully-knife.

Gully erosion is the process by which gullies are formed. Hillsides are more prone to gully erosion when they are cleared of vegetation, through deforestation, over-grazing or other means. The eroded soil is easily carried by the flowing water after being dislodged from the ground, normally when rainfall falls during short, intense storms such as during thunderstorms.

A gully may grow in length by means of headward (i.e. upstream) erosion at a knick point. This erosion can result from interflow as well as surface runoff.

Gullies reduce the productivity of farmland where they incise into the land, and produce sediment that may clog downstream waterbodies. Because of this, much effort is invested into the study of gullies within the scope of geomorphology, in the prevention of gully erosion, and in restoration of gullied landscapes. The total soil loss from gully formation and subsequent downstream river sedimentation can be sizeable.

Gullies can be formed or enlarged by a number of human activities.

Artificial gullies are formed during hydraulic mining when jets or streams of water are projected onto soft alluvial deposits to extract gold or tin ore. The remains of such mining methods are very visible landform features in old goldfields such as in California and northern Spain. The badlands at Las Medulas for example, were created during the Roman period by hushing or hydraulic mining of the gold-rich alluvium with water supplied by numerous aqueducts tapping nearby rivers. Each aqueduct produced large gullies below by erosion of the soft deposits. The effluvium was carefully washed with smaller streams of water to extract the nuggets and gold dust.

Gullies are widespread at mid- to high latitudes on the surface of Mars, and are some of the youngest features observed on that planet, probably forming within the last few 100,000 years. There, they are one of the best lines of evidence for the presence of liquid water on Mars in the recent geological past, probably resulting from the slight melting of snowpacks on the surface or ice in the shallow subsurface on the warmest days of the Martian year. Flow as springs from deeper seated liquid water aquifers in the deeper subsurface is also a possible explanation for the formation of some Martian gullies.

All content from Kiddle encyclopedia articles (including the article images and facts) can be freely used under Attribution-ShareAlike license, unless stated otherwise. Cite this article:
Gully Facts for Kids. Kiddle Encyclopedia.