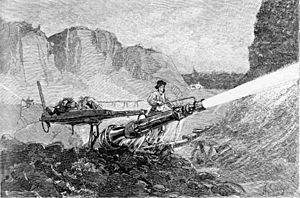 A miner using a hydraulic jet to mine for gold in California, from The Century Magazine January 1883

Hydraulic mining is a form of mining that uses high-pressure jets of water to dislodge rock material or move sediment. In the placer mining of gold or tin, the resulting water-sediment slurry is directed through sluice boxes to remove the gold. It is also used in mining kaolin and coal.

Hydraulic mining developed from ancient Roman techniques that used water to excavate soft underground deposits. Its modern form, using pressurized water jets produced by a nozzle called a "monitor", came about in the 1850s during the California Gold Rush in the United States. Though successful in extracting gold-rich minerals, the widespread use of the process resulted in extensive environmental damage, such as increased flooding and erosion, and sediment blocking waterways and covering farm fields. These problems led to its legal regulation. Hydraulic mining has been used in various forms around the world.

All content from Kiddle encyclopedia articles (including the article images and facts) can be freely used under Attribution-ShareAlike license, unless stated otherwise. Cite this article:
Hydraulic mining Facts for Kids. Kiddle Encyclopedia.