Dutch Flat (also, Dutchman's Flat, Dutch Charlie's Flat, and Charley's Flat) is a small unincorporated community and census-designated place (CDP) in Placer County, California, United States, about 30 miles (48 km) northeast of Auburn along Interstate 80. It was founded by German immigrants in 1851 and was once one of the richest gold mining locations in California. Dutch Flat is now registered as a California Historical Landmark.

Dutch Flat was founded by two German brothers, Joseph and Charles Dornbach who settled there in 1851 during the California Gold Rush.

To the south of their settlement was the busy mining camp of Green Valley, where 2,000 men were at work when the Dornbachs arrived. Across the Bear River in Nevada County was another camp, Little York, and just west, a trading post at Cold Springs (later known as Gold Run). All these camps were supplied by mule train from Illinoistown, near today's Colfax. Muleskinners referred to the Dornbach's camp as 'Dutch Charlie's Flat,' and thus the town was named. During this period many Germans were referred as 'Dutch' as a shorthand for Deutschland. In the 1870s an attempt was made to change the name to German Level.

While Dutch Flat was originally settled by miners, it first gained prominence as an important stagecoach stop, making it one of the largest and most important towns in Placer County from about 1864 to 1866. In the fall of 1866, however, the railroad had reached Cisco, 20 miles (32 km) further up the ridge, and Dutch Flat lost most of its importance as a stage stop. 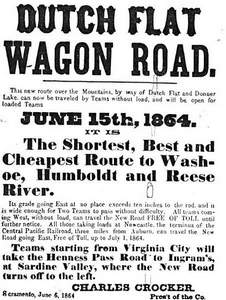 In 1859 Dr. Daniel Strong of Dutch Flat invited railroad surveyor and chief engineer of the Central Pacific Railroad Theodore Judah to come and evaluate a possible route across the Sierra Nevada mountains. One of the first large mining ditches to reach Dutch Flat had, in effect, demonstrated the existence of easy grades up to Emigrant Gap; from there, the line of the old Donner Trail across the Sierra Nevada was also such that a railroad could be built. Judah argued vociferously for the Central Pacific's financial backers—including California's "Big Four": Leland Stanford, Collis P. Huntington, Mark Hopkins, and Charles Crocker—to employ the route for a trans-Sierra route that would link up to existing Union Pacific service in Utah or Nevada, instead of Huntington's less-ambitious plan to cater to the lucrative stage and wagon-hauled freight between Sacramento and the Comstock mining boom by building a well-surfaced toll road from Dutch Flat to Donner Lake, and then onward to the Carson Valley.

Judah may have been the most vocal critic of the Dutch Flat-Donner Pass Wagon Road, but he wasn't the only opponent. San Francisco investors, Sierra miners, and even the general public believed that the Central Pacific Railroad was focused only on getting their line built to Dutch Flat. Other Californians believed the whole railroad construction project a scam and that no one, not even "Crazy Judah," had ever really figured out a practicable route through the Sierra range.

The perception of greed and avarice raised the ire of many. San Francisco newspapers boldly accused the Central Pacific of planning only to lay track up to Dutch Flat and no further. Numerous articles and pamphlets arguing against the "Great Dutch Flat Swindle!" flooded the press. San Francisco's Alta California editorialized, "The Sacramentans Big Four are determined to have no railroad but Dutch Flat. The Capital City has aided in the raid upon this county for $80,000, upon Placer County for $25,000, and upon the state for millions. There will never be a railroad via Dutch Flat to Nevada Territory. There are obstacles which cannot be overcome. The Pacific Railroad will follow another route, not through Sacramento or anywhere else in the vicinity."

Despite the intense backlash, there was never any foundation to the stories spread by detractors of the Central Pacific Railroad. Judah's successor as chief engineer, Samuel S. Montague, was immediately ordered to continue surveying the future route as far as the "Big Bend of the Truckee River" (where it turns north toward Pyramid Lake), more than 40 miles (64 km) east of the California border. Obviously, there was no doubt among the Big Four that the Central Pacific line would eventually connect with the Union Pacific somewhere in Utah or the Nevada territory.

Gold miners excavate an eroded bluff with jets of water at a placer mine in Dutch Flat, California sometime between 1857 and 1870.

Mining operations at Dutch Flat reached their peak during the 1870s, with thousands of miners working the surrounding area. Prior to the 1870s, gold mining was often a solitary and small-scale pursuit. In 1872, however, the Cedar Creek Company of London purchased over 30 claims in the area and began working them in a more aggressive and industrial fashion, employing hydraulic mining to reach hitherto unreachable deposits of gold by literally blasting it out of alluvial deposits with high-pressure water cannons known as “monitors.” The many dozens of mining claims dividing the old channel gravels beside Dutch Flat and Gold Run made for a thriving economy. In January 1884, however, in a historic verdict, a United States District Court banned the flushing of debris into streams. Implementing the decision was difficult, as many miners refused to accept the court decision. Court challenges were filed, injunctions were disobeyed, inspectors were threatened with violence, but eventually hydraulic operations were brought to an end.

Lumber was a prominent industry in Dutch Flat's history. From 1861 to 1907, the Towle Brothers Lumber Company was among the largest in the state, owning over 20,000 acres (81 km2) of land, with a private narrow-gauge railroad 38 miles (61 km) long, and employing a workforce of around 200 men, including fifty Chinese workers.

Dutch Flat's Chinatown began in the 1850s, and by the late 1860s, when the transcontinental railroad was under construction, it was one of the largest Chinese settlements outside of San Francisco. In 1853, Dutch Flat had a population of 6,000 including 3,500 Chinese. In 1877 Old Chinatown burned down, and the settlement relocated south of town, near the Dutch Flat Depot on the Central Pacific Railroad. Adjoining the pioneer American cemetery just above the town is the Chinese burial grounds. 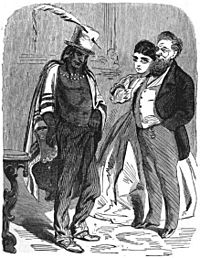 In the 19th century, Dutch Flat was referred to by residents as "the Athens of the Foothills." It had a thriving amateur dramatical society and debating society, and Mark Twain lectured at its Opera House. Dutch Flat was also frequently mentioned in works by Bret Harte, including "Muck-A-Muck: A Modern Indian Novel After Cooper."

As of October 2009, Dutch Flat had 333 residents. The town is designated "semi-ghost" and while tourism makes up much of the local economy, many of its current residents are retirees, families and professionals who commute to nearby jobs.

According to the United States Census Bureau, the CDP covers an area of 0.6 square miles (1.5 km²), all of it land.

Recently, residents of Dutch Flat have sought to increase tourism by asking the state Department of Transportation for a sign on I-80 saying Dutch Flat is a national historic landmark. The Golden Drift Museum on Main Street is open in summer. Historic buildings of note include the Dutch Flat Hotel (1853), Methodist Church (1861), old Dutch Flat Elementary School (1898), Odd Fellows Building and the Masonic Hall (both pre-1856), and the Dutch Flat Cemetery. Dutch Flat is near all mountain recreation areas and only a short distance from snow and water skiing, fishing, biking, kayaking, gold panning and hiking the abundant mountain trails. The town hosts a parade on the 4th of July.

Dutch Flat has been mentioned or used as a setting by the following authors:

All content from Kiddle encyclopedia articles (including the article images and facts) can be freely used under Attribution-ShareAlike license, unless stated otherwise. Cite this article:
Dutch Flat, California Facts for Kids. Kiddle Encyclopedia.