Kids Encyclopedia Facts
This page is about the ridge gap. For the community, see Emigrant Gap, California.
Not to be confused with Emigrant Pass (disambiguation).

Emigrant Gap is a gap in a ridge on the California Trail as it crosses the Sierra Nevada, to the west of what is now known as Donner Pass. Here the cliffs are so steep that, back in the 1840s, the pioneers on their way to California had to lower their wagons on ropes in order to continue.

The Emigrant Gap was so named because it was a low gap on a ridge where the emigrants' wagons crossed from the American River drainage to the Bear River drainage. It was part of the Truckee Route, a portion of the California Trail by which pioneers, heading west, emigrated from the United States to California, which was part of Mexico until it was captured by the United States in the Mexican–American War (1846–1848).

There is a California historical marker (number 403) on Interstate 80 commemorating this brave and arduous task, which was dedicated on June 25, 1950.

The spring of 1845 saw the first covered wagons surmount the Sierra Nevada Mountains. They left this valley, ascended to the ridge, and turned westward to old Emigrant Gap. The wagons were lowered by ropes to the floor of Bear Valley. Hundreds followed before, during, and after the gold rush. This was a hazardous portion of the overland emigrant trail.

The Donner Party was not the first emigrant party to cross Emigrant Gap; the Stephens–Townsend–Murphy Party crossed the Sierra in 1844–45. 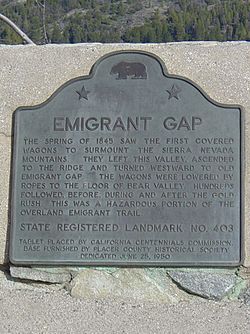 All content from Kiddle encyclopedia articles (including the article images and facts) can be freely used under Attribution-ShareAlike license, unless stated otherwise. Cite this article:
Emigrant Gap Facts for Kids. Kiddle Encyclopedia.