This article refers to the village: for the glen itself, see Glen Coe. 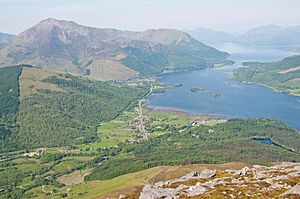 Glencoe village from the summit of the Pap of Glencoe

Glencoe or Glencoe Village (Gaelic: A’ Chàrnaich) is the main settlement in Glen Coe in the Lochaber area of the Scottish Highlands. It lies at the north-west end of the glen, on the southern bank of the River Coe where it enters Loch Leven (a salt-water loch off Loch Linnhe).

The village falls within the Ross, Skye and Lochaber part of the Highland council area for local government purposes. It is part of the registration county of Argyll and the lieutenancy area of Inverness for ceremonial functions.

The use of the term 'Glencoe Village' is a modern one, to differentiate the settlement from the glen itself. 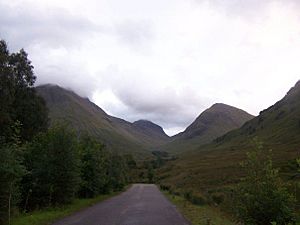 A view of Glencoe

The village is on the site of the Massacre of Glencoe in 1692, in which 38 members of the Clan MacDonald of Glencoe were killed by forces acting on behalf of the government of King William III following the Glorious Revolution.

The village occupies an area of the glen known as Carnoch. Native Gaelic speakers who belong to the area always refer to the village as A'Charnaich, meaning "the place of cairns". Even today there is Upper Carnoch and Lower Carnoch. A small hospital - currently empty - with emergency services at Fort William 16 miles away, lies at the southern end of the village just over an arched stone bridge.

Within Carnoch there is a small village shop, Scottish Episcopal Church, Glencoe and North Lorn local history museum, Post Office, Glencoe Mountain Rescue Team centre, an outdoor centre, a number of bed and breakfast establishments, and a small primary school. Several eating establishments are around including the Glencoe Hotel, Glencoe Cafe and The Clachaig Inn. Glencoe is also a popular location for self-catering holidays; with many chalets, cottages and lodges available for weekly and short break rental. Also located in the village, but along the A82, is the Glencoe Visitor Centre, run by the National Trust for Scotland. This modern (constructed in 2002) visitor centre houses a coffee shop, store, and information centre.

The village is surrounded by spectacular mountain scenery and is popular with serious hill-walkers, rock and ice climbers. It has been seen in numerous films, including Harry Potter and the Prisoner of Azkaban as the home of Hagrid, and the 2012 James Bond movie Skyfall, also known from Ian Fleming's original novels as the birthplace of James Bond's father Andrew Bond.

Well known residents include Hamish MacInnes, mountaineer and inventor of the MacInnes Stretcher.

All content from Kiddle encyclopedia articles (including the article images and facts) can be freely used under Attribution-ShareAlike license, unless stated otherwise. Cite this article:
Glencoe, Highland Facts for Kids. Kiddle Encyclopedia.