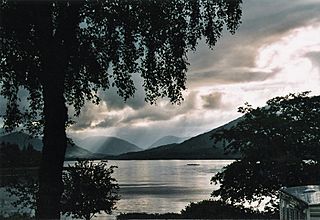 Loch Linnhe is a sea loch on the west coast of Scotland. The part upstream of Corran is known in Gaelic as An Linne Dhubh (the black pool, originally known as Loch Abar), and downstream as An Linne Sheileach (the salty pool). The name Linnhe is derived from the Gaelic word linne, meaning 'pool'.

Loch Linnhe follows the line of the Great Glen Fault, and is the only sea loch along the fault. About 50 kilometres (30 miles) long, it opens onto the Firth of Lorne at its southwestern end. The part of the loch upstream of Corran is 15 km (9 mi) long and an average of about 2 km (1 mi) wide. The southern part of the loch is wider, and its branch southeast of the island of Lismore is known as the Lynn of Lorne. Loch Eil feeds into Loch Linnhe at the latter's northernmost point, while from the east Loch Leven feeds in the loch just downstream of Corran and Loch Creran feeds into the Lynn of Lorne. The town of Fort William lies at the northeast end of the loch, at the mouth of the River Lochy.

All content from Kiddle encyclopedia articles (including the article images and facts) can be freely used under Attribution-ShareAlike license, unless stated otherwise. Cite this article:
Loch Linnhe Facts for Kids. Kiddle Encyclopedia.