Direction of past movement in the Great Glen fault

The Great Glen is a series of glens in Scotland. It runs 100 kilometres from Inverness on the Moray Firth to Fort William at the head of Loch Linnhe.

The Great Glen follows a large geological fault known as the Great Glen Fault. It bisects the Scottish Highlands into the Grampian Mountains to the southeast and the Northwest Highlands to the northwest.

The Glen is a natural travelling route in the Highlands of Scotland. It is used by both the Caledonian Canal and the A82 road, which link the city of Inverness on the east coast with Fort William on the West.

It was important in controlling the Highland Scottish clans, particularly in the Jacobite uprisings of the 18th century. This is recognised by the towns of Fort William (population ~10,000) in the south, Fort Augustus (popln. 600+) in the middle of the Glen, and Fort George (to this day an army barracks), just to the north of Inverness. These settlements were built by the British Army to control the Highlands in the 17th/18th centuries.

Fort William is now a significant town. Despite the difficult terrain, Fort William has rail connection with Glasgow in the south and Mallaig on the north-west coast. It is a tourism centre. The Caledonian Canal connects it with Inverness.

Much of the Glen is taken up with a series of lochs, with rivers connecting them. The Caledonian Canal also uses the lochs as part of the route, but the rivers are not navigable.

From northeast to southwest, the natural water features along the Great Glen are:

The watershed, or water-divide, lies between Loch Oich and Loch Lochy. Loch Linnhe to the south of Fort William is a sea-loch into which both the River Lochy and Caledonian Canal emerge. At the north end, the River Ness empties into the Moray Firth. 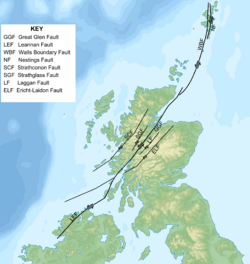 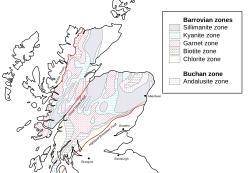 The Great Glen Fault is a long strike-slip fault that runs through its namesake the Great Glen in Scotland. The fault is actually much longer, and over 400 million years old. It extends in both directions beyond mainland Scotland.

To the northeast the fault continues, before becoming obscured by the effects of Mesozoic rifting to the north of Shetland.

The fault continues on the North American side of the North Atlantic Ocean, but is no longer part of a continuous fault. The complete fault was broken when the Mid-Atlantic Ridge formed 200 million years ago.

The North American side of the fault runs the length of northwestern Newfoundland, Canada, and on into the Gulf of St. Lawrence. It is at least 300 miles (480 km) long.

The Great Glen Fault has a long history of movements. It formed towards the end of the Caledonian orogeny (mountain building). It was caused by the collision of tectonic plates at the end of the Silurian period. The rifting continued into the early Devonian. The fault first happened about 430–390 million years ago.

The second main phase of movement was during the Carboniferous. The exact timing is uncertain. Folds in Devonian rocks are cut by members of the Upper Carboniferous to Lower Permian dyke swarm. The Great Glen Fault had its final phase of movement during the Upper Cretaceous to early Tertiary. The displacement (of one side compared to the other) is about 64 miles (104 km).

Weathering along the fault zone during Quaternary glaciation formed the famous Loch Ness.

The fault is mostly inactive today, but occasional moderate tremors have been recorded over the past 150 years.

All content from Kiddle encyclopedia articles (including the article images and facts) can be freely used under Attribution-ShareAlike license, unless stated otherwise. Cite this article:
Great Glen Facts for Kids. Kiddle Encyclopedia.