Loch Ness ( Scottish Gaelic: Loch Nis) is a large, deep, freshwater loch in the Scottish Highlands extending for approximately 23 miles (37 km) southwest of Inverness. Its surface is 52 ft (16 m) above sea level. Loch Ness is best known for alleged sightings of the cryptozoological Loch Ness Monster, also known affectionately as "Nessie". It is connected at the southern end by the River Oich and a section of the Caledonian Canal to Loch Oich. At the northern end there is the Bona Narrows which opens out into Loch Dochfour, which feeds the River Ness and a further section of canal to Inverness. It is one of a series of interconnected, murky bodies of water in Scotland; its water visibility is exceptionally low due to a high peat content in the surrounding soil.

Loch Ness is the second largest Scottish loch by surface area at 22 sq mi (56 km2) after Loch Lomond, but due to its great depth, it is the largest by volume in the British Isles. Its deepest point is 755 ft (230 m), making it the second deepest loch in Scotland after Loch Morar. A 2016 survey claimed to have discovered a crevice that pushed the depth to 889 ft (271 m) but further research determined it to be a sonar anomaly. It contains more fresh water than all the lakes in England and Wales combined, and is the largest body of water in the Great Glen, which runs from Inverness in the north to Fort William in the south.

At Drumnadrochit is the "Loch Ness Centre and Exhibition" which examines the natural history and legend of Loch Ness. Boat cruises operate from various locations on the loch shore, giving visitors the chance to look for the "monster".

Urquhart Castle is located on the western shore, 1 mile (1.6 km) east of Drumnadrochit.

Lighthouses are located at Lochend (Bona Lighthouse) and Fort Augustus.

Loch Ness is thought by some to be the home of the Loch Ness Monster (also known as "Nessie"), a cryptid, reputedly a large unknown animal. It is similar to other supposed lake monsters in Scotland and elsewhere, though its description varies from one account to the next. Popular interest and belief in the animal's existence has varied since it was first brought to the world's attention in 1933. 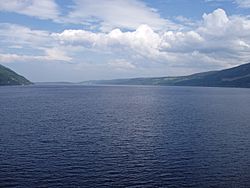 The following fish species are native to Loch Ness. A number of others such as perch and roach have been introduced in the Loch or Caledonian Canal with various levels of success.

Loch Ness has one island, Cherry Island, at the southwestern end of the loch, near Fort Augustus. It is an artificial island, known as a crannog, and was probably constructed during the Iron Age.

There was formerly a second island (Dog Island) which was submerged when the water level was raised during the construction of the Caledonian Canal.

Loch Ness serves as the lower storage reservoir for the Foyers pumped-storage hydroelectric scheme, which was the first of its kind in the United Kingdom. The turbines were originally used to provide power for a nearby aluminium smelting plant, but now electricity is generated and supplied to the National Grid. Another scheme, the 100 megawatt Glendoe Hydro Scheme near Fort Augustus, began generation in June 2009.

Loch Ness lies along the Great Glen Fault, which forms a line of weakness in the rocks which has been excavated by glacial erosion, forming the Great Glen and the basins of Loch Lochy, Loch Oich and Loch Ness.

John Cobb died in an attempt at the water speed record when his boat Crusader struck an unexplained wake on the surface of the loch in 1952. His accident was recorded by the BBC reporters on site at the time. Nearby, there is a memorial to him erected by the people of Glenurquhart

On 31 August 1974, David Scott Munro, of Ross-shire Caberfeidh Water Ski Club, became the first person in the world to water ski (mono ski) the length of Loch Ness. From Lochend to Fort Augustus and back, he covered the 48 miles (77 km) in 77 minutes at an average speed of 37 miles per hour (60 km/h).

In July 1966, Brenda Sherratt became the first person to swim the length of the loch. She began her swim the day before her 18th birthday, completing it the following day having turned 18 during her swim. It took her 31 hours and 27 minutes.

All content from Kiddle encyclopedia articles (including the article images and facts) can be freely used under Attribution-ShareAlike license, unless stated otherwise. Cite this article:
Loch Ness Facts for Kids. Kiddle Encyclopedia.