The Caledonian Canal connects the Scottish east coast at Inverness with the west coast at Corpach near Fort William in Scotland. The canal was constructed in the early nineteenth century by Scottish engineer Thomas Telford.

The canal runs some 60 miles (97 km) from northeast to southwest and reaches 106 feet above sea level. Only one third of the entire length is man-made, the rest being formed by Loch Dochfour, Loch Ness, Loch Oich, and Loch Lochy. These lochs are located in the Great Glen, on a geological fault in the Earth's crust. There are 29 locks (including eight at Neptune's Staircase, Banavie), four aqueducts and 10 bridges in the course of the canal.

In 1620, a Highland prophet called the Brahan Seer predicted that full-rigged ships would one day be sailing round the back of Tomnahurick, near Inverness, at a time when the only navigable route near the location was the River Ness, on the other side of Tomnahurick. Engineers started to look at the feasibility of a canal to connect Loch Linnhe near Fort William to the Moray Firth near Inverness in the 18th century, with Captain Edward Burt rejecting the idea in 1726, as he thought the mountains would channel the wind and make navigation too precarious. The Commissioners of Forfeited Estates had originally been set up to handle the seizure and sale of land previously owned by those who had been convicted of treason following the Jacobite rising of 1715. By 1773, they had turned their attention to helping the fishing industry, and commissioned the inventor and mechanical engineer James Watt to make a survey of the route. He published a report in 1774, which suggested that a 10-foot (3.0 m) canal from Fort William to Inverness, passing through Loch Lochy, Loch Oich, Loch Ness and Loch Dochfour, would require 32 locks, and could be built for £164,032. He emphasised the benefits to the fishing industry, of a shorter and safer route from the east to the west coast of Scotland, and the potential for supplying the population with cheaper corn, but again, thought that winds on the lochs might be a problem.

Although no action was taken at the time, in 1785 John Knox expounded the benefits of it relieving distress in the Highlands, and preventing ships having to navigate the dangerous Pentland Firth between the Orkney Islands and Caithness. William Fraser, when proposing his own scheme for a canal in 1793, announced that "nature had finished more than half of it already". At the time, much of the Highlands were depressed as a result of the Highland Clearances, which had deprived many of their homes and jobs. Laws had been introduced which sought to eradicate the local culture, including bans on wearing tartan, playing the bagpipes, and speaking Scottish Gaelic. Many emigrated to Canada or elsewhere, or moved to the Scottish Lowlands. The engineer Thomas Telford was asked to investigate the problem of emigration in 1801, and in 1802 published his report, which suggested that the problem was caused by landowners who had previously kept cattle creating vast sheep-farms. Realising that direct government action to tackle the issue would be seen as interference, he therefore suggested that a programme of public works, involving roads, bridges and canals, would be a way to provide jobs for people who had been displaced by the sheep farming, and to stimulate industry, fishery and agriculture.

Telford consulted widely with shipowners, who favoured a canal instead of the hazardous journey around the north of Scotland via Cape Wrath and the Pentland Firth. He obtained advice from Captain Gwynn of the Royal Navy, who stated that Loch Ness and Loch Lochy were sufficiently deep for any size of boat, and had safe anchorages if winds proved to be a problem, but that Loch Oich would need to be made deeper, as it was shallow in places. He established that Loch Garry, to the west of Invergarry, and Loch Quoich, beyond that, would provide an adequate water supply. He estimated that a canal suitable for ships with a draught of 20 feet (6.1 m) could be built in seven years, and would cost around £350,000. An additional benefit would be the protection that the canal offered to shipping from attacks by French privateers. Telford also looked at the possibility of a canal to link Loch Eil to Loch Shiel, both to the west of Fort William, but ruled out the scheme because of the depth of cuttings that would have been required.

On 27 July 1803, an Act of Parliament was passed to authorise the project, and carried the title: An Act for granting to his Majesty the Sum of £20,000, towards defraying the Expense of making an Inland Navigation from the western to the eastern Sea, by Inverness and Fort William; and for taking the necessary steps towards executing the same. The Act appointed Commissioners, to oversee the project, and some funding to enable the work to start. Less than a year later, on 29 June 1804, the Commissioners obtained a second Act of Parliament, which granted them £50,000 per year of government money, payable in two instalments, to fund the ongoing work. Provision was made for private investors to buy shares in the scheme, for any amount over £50, and as well as building the main line of the canal, the engineers could alter Loch Garry, Loch Quoich and Loch Arkaig, to improve their function as reservoirs. Telford was asked to survey, design and build the waterway. He worked with William Jessop on the survey, and the two men oversaw the construction until Jessop died in 1814. The canal was expected to take seven years to complete, and to cost £474,000, to be funded by the Government, but both estimates were inadequate.

Because of the remoteness of the location, construction was started at both ends, so that completed sections could be used to bring in the materials for the middle sections. As Thomas Telford could only visit the work about twice a year, he appointed Matthew Davidson, like Telford, a Dumfrieshire stonemason, to manage the work at the east end. John Telford, who is thought not to have been related to Thomas, was to manage the difficult western end. The work was to prove a serious challenge to John Telford's health and he died in 1807, to be replaced by Alexander Easton. John Telford was buried in Kilmallie churchyard, where his ornate grave, now in dilapidated condition, can still be seen. 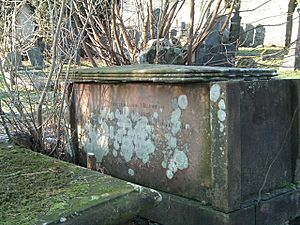 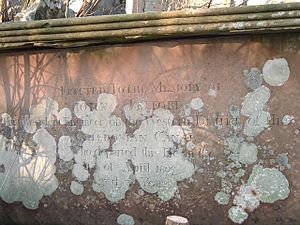 At Corpach, near Fort William, the entrance lock was built on rock, but at the other end, there was 56 feet (17 m) of mud below the proposed site of the sea lock. Rock was tipped on top of the mud and was allowed to settle for six months before construction could begin. The ground through which the canal was cut was variable, and further difficulties were experienced with the construction of the locks, the largest ever built at the time. There were also problems with the labour force, with high levels of absence, particularly during and after the potato harvest and the peat cutting season. This led to Telford bringing in Irish navvies to manage the shortfall, which led to further criticism, since one of the main aims of the project was to reduce unemployment in the Highlands. The canal finally opened in 1822, having taken an extra 12 years to complete, and cost £910,000. Over 3,000 local people had been employed in its construction, but the draught had been reduced from 20 to 15 ft (6.1 to 4.6 m) in an effort to save costs. In the meantime, shipbuilding had advanced, with the introduction of steam-powered iron-hulled ships, many of which were now too big to use the canal. The Royal Navy did not need to use the canal either, as Napoleon had been defeated at Waterloo in 1815, and the perceived threat to shipping when the canal was started was now gone.

Before long, defects in some of the materials used became apparent, and part of Corpach double lock collapsed in 1843. This led to a decision to close the canal to allow repairs to be carried out, and the depth was increased to 18 feet (5.5 m) at the same time. The work was designed by Telford's associate James Walker, carried out by Jackson and Bean of Aston, Birmingham and completed between 1843 and 1847 at a cost of £136,089. However, not all of the traffic expected to return to using the canal did so. Commercially, the venture was not a success, but the dramatic scenery through which it passes led to it becoming a tourist attraction. Queen Victoria took a trip along it in 1873, and the publicity surrounding the trip resulted in a large increase in visitors to the region and the canal. The arrival of the railways at Fort William, Fort Augustus and Inverness did little to harm the canal, as trains were scheduled to connect with steamboat services.

There was an upsurge in commercial traffic during the First World War, when components for the construction of mines were shipped through the canal on their way from America to "U.S. Naval Base 18” (Muirtown Basin, Inverness), and fishing boats used it to avoid possible enemy action on the longer route around the north of Scotland. During this period there was 24-hour operation, facilitated by buoyage and lighting throughout its length. Ownership passed to the Ministry of Transport in 1920, and then to British Waterways in 1962. Improvements were made, with the locks being mechanised between 1964 and 1969. By 1990, the canal was in obvious need of restoration, with lock walls bulging, and it was estimated that repairs would cost £60 million. With no prospect of the Government funding this, British Waterways devised a repair plan, and between 1995 and 2005, sections of the canal were drained each winter. Stainless steel rods were used to tie the double-skinned lock walls together, and over 25,000 tonnes of grout were injected into the lock structures. All of the lock gates were replaced, and the result was a canal whose structures were probably in a better condition than they had ever been.

The canal is now a Scheduled Ancient Monument, and attracts over 500,000 visitors each year. British Waterways, who work with the Highland Council and Forestry and Land Scotland through the Great Glen Ways Initiative, were hoping to increase this number to over 1 million by 2012. There are many ways for tourists to enjoy the canal, such as taking part in the Great Glen Rally, cycling along the tow-paths, or cruising on Hotel Barges.

The canal has several names in Scottish Gaelic including Amar-Uisge/Seòlaid a' Ghlinne Mhòir ("Waterway of the Great Glen"), Sligh'-Uisge na h-Alba ("Waterway of Scotland") and a literal translation (An) Canàl Cailleannach.

Locks along the Caledonian Canal 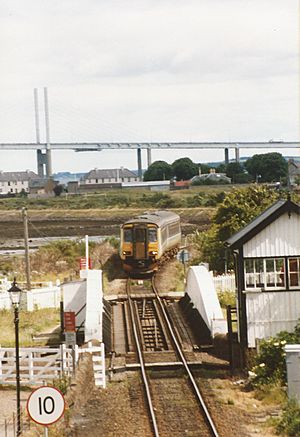 British Rail Class 156 on a Far North Line service crossing over the canal on the Clachnaharry Swing Bridge.

All content from Kiddle encyclopedia articles (including the article images and facts) can be freely used under Attribution-ShareAlike license, unless stated otherwise. Cite this article:
Caledonian Canal Facts for Kids. Kiddle Encyclopedia.