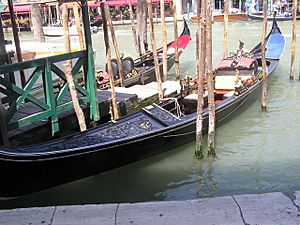 The gondola is a traditional, flat-bottomed Venetian rowing boat, well suited to the conditions of the Venetian lagoon. The rowing oar, which is not fastened to the hull, is used in a sculling manner, also acting as the rudder. For centuries the gondola was the chief means of transportation and most common watercraft within Venice. It is propelled by a gondolier. In modern times the iconic boats still have a role in public transport in the city, serving as traghetti (ferries) over the Grand Canal. They are also used in special regattas (rowing races) held amongst gondoliers. Their primary role today, however, is to carry tourists on rides at fixed rates. 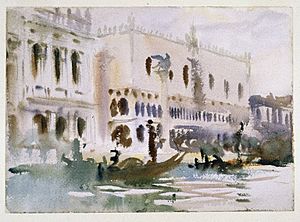 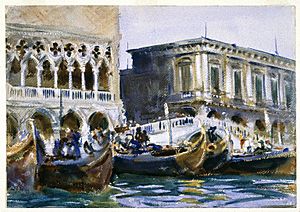 The gondola is propelled by a person (the gondolier) who stands facing the bow and rows with a forward stroke, followed by a compensating backward stroke. The oar rests in an elaborately carved wooden rest (forcola) shaped to project from the side of the craft so as to allow the slight drag of each return stroke to pull the bow back to its forward course. Because of the vessel's flat bottom it may also be "drifted" sideways when required. Contrary to popular belief, the gondola is never poled like a punt as the waters of Venice are too deep.

Until the early 20th century, as many photographs attest, gondolas were often fitted with a "felze", a small cabin, to protect the passengers from the weather or from onlookers. Its windows could be closed with louvered shutters—the original "venetian blinds". After the elimination of the traditional felze—possibly in response to tourists complaining that it blocked the view—there survived for some decades a kind of vestigial summer awning, known as the "tendalin" (these can be seen on gondolas as late as the mid-1950s, in the film Summertime). While in previous centuries gondolas could be many different colors, a sumptuary law of Venice required that gondolas should be painted black, and they are customarily so painted now.

It is estimated that there were eight to ten thousand gondolas during the 17th and 18th century. There are just over four hundred in active service today, virtually all of them used for hire by tourists. 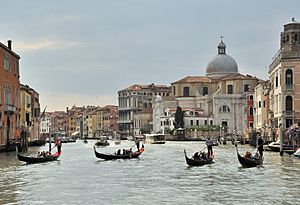 A veritable phalanx of Gondolas on the Grand Canal 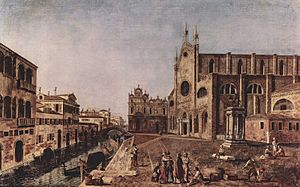 During their heyday as a means of public transports, teams of four men—three oarsmen and a fourth person, primarily shore-based and responsible for the booking and administration of the gondola (Il Rosso Riserva)—would share ownership of a gondola. However, as the gondolas became more of a tourist attraction than a mode of public transport all but one of these cooperatives and their offices have closed. The category is now protected by the Institution for the Protection and Conservation of Gondolas and Gondoliers, headquartered in the historical center of Venice. 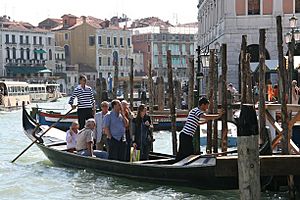 The historical gondola was quite different from its modern evolution- the paintings of Canaletto and others show a much lower prow, a higher "ferro", and usually two rowers. The banana-shaped modern gondola was developed only in the 19th century by the boat-builder Tramontin, whose heirs still run the Tramontin boatyard. The construction of the gondola continued to evolve until the mid-20th century, when the city government prohibited any further modifications.

The oar or rèmo is held in an oar lock known as a fórcola. The forcola is of a complicated shape, allowing several positions of the oar for slow forward rowing, powerful forward rowing, turning, slowing down, rowing backwards, and stopping. The ornament on the front of the boat is called the fèrro (meaning iron) and can be made from brass, stainless steel, or aluminium. It serves as decoration and as counterweight for the gondolier standing near the stern. 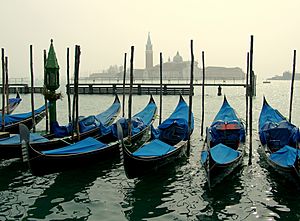 Gondolas at their moorings

Gondolas are handmade using 8 different types of wood (fir, oak, cherry, walnut, elm, mahogany, larch and lime) and are composed of 280 pieces. The oars are made of beech wood. The port side of the gondola is made longer than the starboard side. This asymmetry causes the gondola to resist the tendency to turn towards the left at the forward stroke. It is a common misconception that the gondola is a paddled vessel when the correct term is rowed, as in "I rowed my gondola to work."

Every detail of the gondola has its own symbolism. The iron prow-head of the gondola, called "fero da prorà” or “dol fin“, is needed to balance the weight of the gondolier at the stern and has an “S” shape symbolic of the twists in the Canal Grande. Under the main blade there is a kind of comb with six teeth or prongs (“rebbi “) standing for the six “sestieri” of Venice. A kind of tooth juts out backwards toward the centre of the gondola symbolises the island of Giudecca. The curved top signifies the Doge’s cap. The semi-circular break between the curved top and the six teeth is said to represent the Rialto Bridge. Sometimes three friezes can be seen in-between the six prongs, indicating the three main islands of the city: Murano, Burano and Torcello.

The gondola is also one of the vessels typically used in both ceremonial and competitive regattas, rowing races held amongst gondoliers using the technique of Voga alla Veneta.

The origin of the word "gondola" has never been satisfactorily established, despite many theories. 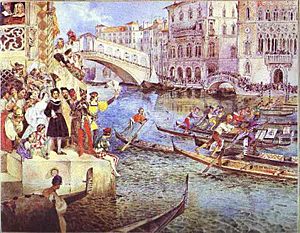 Gondola Races on the Grand Canal of Venice, by Grigory Gagarin (1830s). The image shows so-called gondolinos, a slimmer and light-weight version of the gondola specifically built for racing and elegant outings.

Mark Twain visited Venice in the summer of 1867. He dedicated much of The Innocents Abroad, chapter 23 to describing the curiosity of urban life with gondolas and gondoliers.

The first act of Gilbert and Sullivan's two-act comic operetta The Gondoliers is set in Venice, and its two protagonists (as well as its men's chorus) are of the eponymous profession, even though the political irony that makes up the core of the piece has much more to do with British society than with Venice.

The Japanese manga Aria follows a young woman named Akari as she trains as an apprentice gondolier in Neo-Venezia, a city on a terraformed Mars based on Venice.

In an episode of The Scooby-Doo show, 'A Menace in Venice', the gang goes to visit their friend Antonio in Venice, Italy, and finds that he is haunted by the ghost of an ancestor, the Ghostly Gondolier, who seeks to steal the family heirloom Antonio wears.

All content from Kiddle encyclopedia articles (including the article images and facts) can be freely used under Attribution-ShareAlike license, unless stated otherwise. Cite this article:
Gondola Facts for Kids. Kiddle Encyclopedia.