Loch Long is a body of water in Argyll and Bute, Scotland. The Sea Loch extends from the Firth of Clyde at its southwestern end. It measures approximately 20 miles (32 km) in length, with a width of between 1 and 2 miles (1.6 and 3.2 km). The loch also has an arm, Loch Goil, on its western side.

Loch Long forms part of the coast of the Cowal peninsula and forms the entire western coastline of the Rosneath Peninsula.

Loch Long was historically the boundary between Argyll and Dunbartonshire; however, in 1996 boundary redrawing meant that it moved wholly within the council area of Argyll and Bute.

The steamboat Chancellor used to traverse the loch, departing Dunoon at 11 A.M. and returning about five hours later.

Villages on the loch include Arrochar at its head and Cove on the east shore near its foot.

Several Scottish sea fishing records are attributed to the loch:

Looking across Loch Long to Ardentinny

The Ardentinny Outdoor Education Centre on the western shore uses the loch for watersports.

It is now a popular area for diving on the numerous wrecks that scatter the loch.

The Finnart Oil Terminal is located on the eastern shore of the loch, linked to the Grangemouth Refinery via a 58-mile-long (93 km) pipeline. 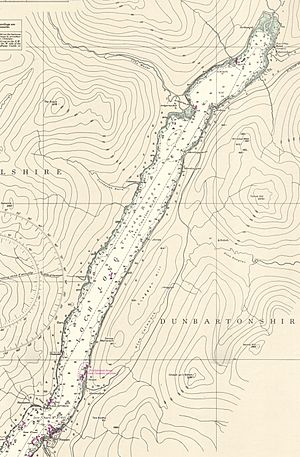 The eastern shore is also the location of the Royal Navy's Coulport Armament depot, part of HMNB Clyde, and the Glen Mallan jetty, linked to Glen Douglas defence munitions depot.

A testing range for torpedoes was established on the loch in 1912, in connection with the Clyde Torpedo Factory in Greenock. It operated through both World Wars, closing in 1986. The loch contains numerous wrecks.

All content from Kiddle encyclopedia articles (including the article images and facts) can be freely used under Attribution-ShareAlike license, unless stated otherwise. Cite this article:
Loch Long Facts for Kids. Kiddle Encyclopedia.