Arrochar ( ARR-ə-khər; Scottish Gaelic: An t-Àrchar or An Tairbeart Iar) is a village located near the head of Loch Long, on the Cowal peninsula in Argyll and Bute, Scottish Highlands. The village is within the Loch Lomond and The Trossachs National Park.

Historically in Dunbartonshire, it is overlooked by a group of mountains called the Arrochar Alps, and in particular by the distinctive rocky summit of the Cobbler. It enjoys good communications as it is at the junction of the A83 and A814 roads and is served by Arrochar and Tarbet railway station. In addition the A82 road runs through Tarbet two miles to the east.

Most notably the, Arrochar Camping Association has held camps in the hills surrounding Arrochar for a few months. A stones throw from the Arrochar and tarbet train station is their chosen stomping grounds. The association, sparked by a trip consisting of 4 campers quickly picked up traction in surrounding areas and the camps now pull in over 20 campers.

For over five centuries this area, the feudal barony of Arrochar, was held by the chiefs of Clan MacFarlane and before them by their ancestors the barons of Arrochar. The family is Celtic in the male line and native to their Highland homeland of tall peaks and deep lochs just above the waist of Scotland. The settlement was a key target for Viking raiders who took their boats 2 miles overland to Tarbet to attack the unprotected inland settlements at Loch Lomond before their defeat in 1263 at the battle of Largs.

The western end of Arrochar marks the traditional boundary of Argyllshire and Dunbartonshire, and this remained the case under local government reorganisation in 1975. However, in 1996 the boundaries of Argyll and Bute and West Dunbartonshire were substantially redrawn, bringing the whole area into Argyll and Bute. 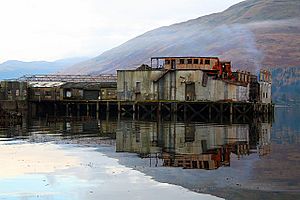 The photograph shows the former torpedo testing facility at the head of Loch Long. It was decommissioned in 1980 and is currently part demolished. Demolition has been stalled since a fire on the site in June 2007.

Torpedoes were fired up Loch Long from tubes at the front of the facility. A boat stood by to recover the (unarmed) torpedoes where they were returned for analysis. The now roofless shed to the left and the main part of the building have tracks where torpedoes were stored and worked on. Hoists on the first floor lowered the torpedoes into the tubes.

The control room at the top looking straight down the loch housed a camera. Behind the control room, above the loading shed, is office accommodation. The rest of the facility included housing and workshops but these have been sold off.

All content from Kiddle encyclopedia articles (including the article images and facts) can be freely used under Attribution-ShareAlike license, unless stated otherwise. Cite this article:
Arrochar, Argyll Facts for Kids. Kiddle Encyclopedia.