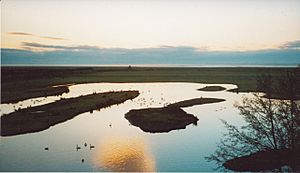 It covers a 587 hectares (1,450 acres) site at Eastpark Farm, on the north shore of the Solway Firth to the south of Dumfries. It is a wild nature reserve with a network of screened approaches and several observation towers. There is a visitor centre and farmhouse accommodation. The site received 16,105 visitors in 2019.

Caerlaverock is home to one of only two UK populations of the "living fossil" Triops cancriformis, the horseshoe shrimp. It is also home to the UK's most northerly population of the natterjack toad.

Almost the entire Svalbard population of barnacle goose overwinters in the Solway Firth area, with many of the birds often at Caerlaverock for part or all of the winter; their protection by the reserve has enabled the population to recover from just 500 birds in the 1940s, to over 25,000 now.

In January 2002, a new education centre was officially opened by King Harald V of Norway.

A pair of ospreys have nested on the reserve since 2005. Their nest can be observed by webcam through the reserve's web-site during the day in the nesting season (April–August). At other times the webcam shows the whooper pond or a barn owl nest.

All content from Kiddle encyclopedia articles (including the article images and facts) can be freely used under Attribution-ShareAlike license, unless stated otherwise. Cite this article:
WWT Caerlaverock Facts for Kids. Kiddle Encyclopedia.