The Barnacle Goose (Branta leucopsis) belongs to the genus Branta of black geese. This genus has species with largely black plumage, setting them apart from the grey Anser species.

Barnacle geese breed mainly on the Arctic islands of the North Atlantic. There are three main populations, with separate breeding and wintering ranges; from west to east:

Small numbers of feral birds, derived from escapes from zoo collections, also breed in other north European countries. Occasionally, a wild bird will appear in the Northeastern United States or Canada, but care must be taken to separate out wild birds from escaped individuals, as barnacle geese are popular waterfowl with collectors. 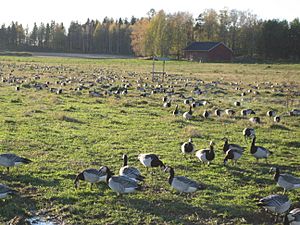 A flock feeding at Helsinki, Finland

Barnacle geese frequently build their nests high on mountain cliffs; away from predators (primarily Arctic foxes and polar bears) but also away from food. Like all geese, the goslings are not fed by the adults. Instead of bringing food to the newly hatched goslings, the goslings are brought to the ground. Unable to fly, the three-day-old goslings jump off the cliff and fall; their small size, feathery down, and very light weight helps to protect some of them from serious injury when they hit the rocks below, but many die from the impact. Arctic foxes are attracted by the noise made by the parent geese during this time and capture many dead or injured goslings. The foxes also stalk the young as they are led by the parents to wetland feeding areas. 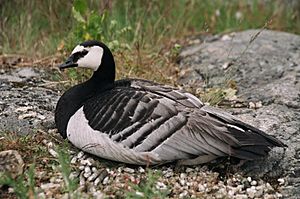 At the Helsinki Zoo, Finland

The barnacle goose is one of the species to which the Agreement on the Conservation of African-Eurasian Migratory Waterbirds (AEWA) applies. According to Sveriges ornitologiska förening the geese began breeding in Sweden in 1971, and according to Skansen it was 40 years ago, more or less, when the entire population of barnacle geese left in the autumn to return in spring, soon after they began breeding in the wild. 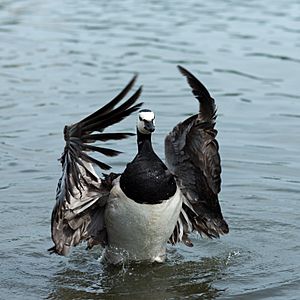 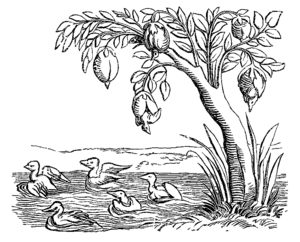 From the 1552 Cosmographia of Sebastian Münster

The natural history of the barnacle goose was long surrounded with a legend claiming that they were born of driftwood:

Nature produces [Bernacae] against Nature in the most extraordinary way. They are like marsh geese but somewhat smaller. They are produced from fir timber tossed along the sea, and are at first like gum. Afterwards they hang down by their beaks as if they were a seaweed attached to the timber, and are surrounded by shells in order to grow more freely. Having thus in process of time been clothed with a strong coat of feathers, they either fall into the water or fly freely away into the air. They derived their food and growth from the sap of the wood or from the sea, by a secret and most wonderful process of alimentation. I have frequently seen, with my own eyes, more than a thousand of these small bodies of birds, hanging down on the sea-shore from one piece of timber, enclosed in their shells, and already formed. They do not breed and lay eggs like other birds, nor do they ever hatch any eggs, nor do they seem to build nests in any corner of the earth.

The legend was widely repeated in, for example, Vincent of Beauvais's great encyclopedia. However, it was also criticized by other medieval authors, including Albertus Magnus. 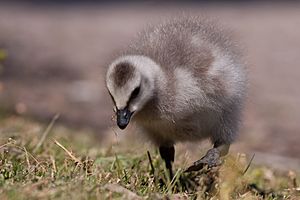 This belief may be related to the fact that these geese were never seen in summer, when they were supposedly developing underwater (they were actually breeding in remote Arctic regions) in the form of barnacles—which came to have the name "barnacle" because of this legend.

All content from Kiddle encyclopedia articles (including the article images and facts) can be freely used under Attribution-ShareAlike license, unless stated otherwise. Cite this article:
Barnacle goose Facts for Kids. Kiddle Encyclopedia.