The American Legion Memorial Bridge, also known as the American Legion Bridge and formerly as the Cabin John Bridge, is a bridge carrying Interstate 495 (Capital Beltway) across the Potomac River between Montgomery County, Maryland and Fairfax County, Virginia in the United States. It is an American Water Landmark.

The bridge has five traffic lanes in each direction. The outermost lane in each direction is an entrance/exit-only lane for traffic to/from the Clara Barton Parkway in Maryland and the George Washington Memorial Parkway and Georgetown Pike (State Route 193) in Virginia. There are no facilities for pedestrians or cyclists, which are prohibited.

The southbound portion of the bridge in April 2014. 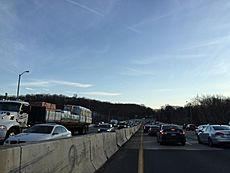 Heavy congestion on the bridge during rush hour

Opened on December 31, 1962, the bridge was originally named the "Cabin John Bridge" because of its proximity to the community of Cabin John on the Maryland side of the Potomac River. The bridge opened without a ceremony due to the cold weather. On May 30, 1969, the bridge was officially renamed the "American Legion Memorial Bridge" in a ceremony led by Lt. Gen. Lewis B. Hershey, director of the U.S. Selective Service System. This action reduced confusion with the Union Arch Bridge, which carries the Washington Aqueduct and MacArthur Boulevard across Cabin John Creek and which some people also called "the Cabin John Bridge". The bridge was widened from its original 6-lane configuration to the current 10-lane version by 1992 via a third span filling the median between what was originally two separate spans.

The American Legion Memorial Bridge is an important commuter route because of its proximity to edge cities and high tech centers in Maryland and Virginia. It is the only high volume crossing between Montgomery County, Maryland and Fairfax County, Virginia, the most populous counties in their respective states. It is also the only major crossing between Maryland and Virginia between the Point of Rocks Bridge, more than 30 miles (50 km) upstream and the Chain Bridge downstream between the Commonwealth of Virginia and the District of Columbia. Congestion on the American Legion Bridge and commuter travel between the western Washington suburbs in both states has fueled support for a western bridge around the Loudoun County/Fairfax County line in Virginia (Virginia Route 28/Fairfax County Parkway area), or farther out as part of the Western Transportation Corridor. Opponents claim that another bridge would increase development in those areas, increase traffic, and generate more pollution in the Chesapeake Bay.

It was announced on November 12, 2019, that the existing spans will be rebuilt and replaced with a new structure expanding capacity from eight to twelve lanes, and will incorporate toll lanes.

All content from Kiddle encyclopedia articles (including the article images and facts) can be freely used under Attribution-ShareAlike license, unless stated otherwise. Cite this article:
American Legion Memorial Bridge (Potomac River) Facts for Kids. Kiddle Encyclopedia.