The Union Arch Bridge, also called the "Cabin John Bridge", is a historic masonry structure in Cabin John, Maryland. It was designed as part of the Washington Aqueduct. The bridge construction began in 1857 and was completed in 1864. The roadway surface was added later. The bridge was designed by Alfred Landon Rives, and built by the United States Army Corps of Engineers under the direction of Lieutenant Montgomery C. Meigs.

The Union Arch Bridge was designated as a Historic National Civil Engineering Landmark by the American Society of Civil Engineers in 1972 and was listed in the National Register of Historic Places in 1973.

The bridge, with an overall length of 450 ft (140 m) and width of 20 ft (6.1 m), is constructed of Massachusetts granite and red sandstone quarried at the nearby Seneca Quarry, and rises 101 ft (31 m) above Cabin John Creek. The main arch span is 220 ft (67 m) long and rises 57 feet 3 inches (17.45 m). The bridge has an internal spandrel wall structure that contains nine additional smaller arches, which are concealed from view by exterior stone sidewalls. At the time of its construction in 1864, the main span was the longest single-span masonry arch in the world. It retained that distinction until the opening of the 218-foot (66 m) span of the Pont Adolphe Bridge in Luxembourg in 1903. Previously, that honour had gone to the Grosvenor Bridge which crosses the River Dee in Chester, England and which was opened by the thirteen-year-old Princess Victoria (five years before becoming Queen) in October 1832. Visually, the similarities between the Union Arch Bridge and the Grosvenor Bridge are remarkable. 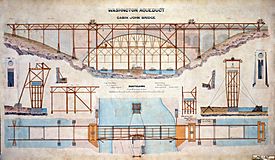 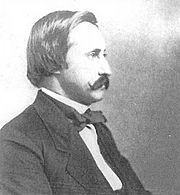 Alfred Landon Rives (b. 1830), designer of the Union Arch Bridge.

While the bridge was being designed and constructed, it was referred to as "Union Arch", "Bridge No. 4" or "Cabin John Bridge" in drawings and government correspondence. The latter two names, however, do not appear in any of the stone carvings that were eventually placed on the bridge. In 1861, as the bridge was nearing completion, the Army drew up initial plans for inscription of commemorative stone tablets to be installed on the bridge. Meigs, who had been promoted to the rank of Captain, issued an order in March 1861 for a tablet on the east bridge abutment. The text was to consist of a title, "Union Bridge," and the names of the principal designers, namely Meigs and Assistant Engineer Alfred L. Rives. By the time the war began, however, Rives had joined the Confederate Army. The final tablet design was modified with the title "Union Arch" and "Alfred L. Rives" was replaced with "Esto Perpetua" ("Let it last forever.").

Several publications have referred to the "Union Arch" of the Washington Aqueduct, but others refer to the structure as the Cabin John Bridge.

The bridge design process had begun in 1853, during the administration of President Franklin Pierce and the Secretary of War, Jefferson Davis. Captain Meigs' 1861 order also called for a tablet on the west bridge abutment, with the title, "Washington Aqueduct" and listing the political leaders that were in office both at the start of the project and at its completion (i.e., Pierce and Davis; President Abraham Lincoln and Secretary of War Simon Cameron). By 1862, however, Davis had left the Union to become President of the Confederate States of America. There was resentment among some members of Congress about the inscription of Davis' name on the bridge, and this led to an order that his name be removed from the tablet. The Department of the Interior, which was managing the aqueduct at that time, ordered the removal of the inscription.

In 1908, President Theodore Roosevelt was asked by various constituents to restore Davis' name to the tablet. Roosevelt ordered the restoration.

Some additional confusion over the bridge name arose when the Capital Beltway was constructed in the early 1960s, and the nearby Beltway bridge over the Potomac River was also called the "Cabin John Bridge." However, in 1969 the Beltway bridge was formally named the "American Legion Memorial Bridge."

The Union Arch Bridge was designated as a Historic National Civil Engineering Landmark by the American Society of Civil Engineers in 1972 and was listed in the National Register of Historic Places in 1973. Both designations refer to the bridge as the "Cabin John Aqueduct."

The bridge continues to support the Washington Aqueduct, as well as a roadway, MacArthur Boulevard. Traffic is narrowed to one lane with traffic signals controlling traffic in either direction. A concrete barrier along the south side creates a separated pedestrian walkway across the bridge. Metal fencing on both sides prevents pedestrians and objects from falling. Signs remind road maintenance crews not to salt the roadway in winter months.

The U.S. Army Corps of Engineers completed a renovation of the bridge in 2001.

All content from Kiddle encyclopedia articles (including the article images and facts) can be freely used under Attribution-ShareAlike license, unless stated otherwise. Cite this article:
Union Arch Bridge Facts for Kids. Kiddle Encyclopedia.