Tysons Galleria is a three-level super-regional mall owned by Brookfield Properties Retail Group located at 2001 International Drive in Tysons, Virginia. It is the second-largest mall in Tysons, and one of the largest in the Washington metropolitan area.

Tysons Galleria was the third major project of the Gudelsky-Lerner partnership. The property was purchased from The Rouse Company which lost a bitter zoning dispute over the site in 1963. In 1981, Lerner bought out the partnership for $21 million, before embarking on a $550 million expansion. It was constructed across Virginia State Route 123 from the existing Tysons Corner Center, which was then undergoing a $160 million expansion.

Anchor store Macy's opened first, on September 1, 1988. The rest of the mall opened a month later, on October 6, 1988 as the Galleria at Tysons II, adding high-end anchor department stores Neiman Marcus and Saks Fifth Avenue. The mall is a part of the $500 million ($1 billion in 2014 dollars) office development The Corporate Office Centre at Tysons II, leading regional residents to refer to Tysons Galleria as "Tysons II", and the older Tysons Corner Center retroactively as "Tysons I". In the early 1990s, the shopping center had annual sales of $262 per square foot, below the market average for malls in the Washington metropolitan area during this time period.

The Galleria was renovated to appear more like a "European streetscape" and expanded in 1997 by Homart Development Company, who had its name changed to Tysons Galleria. Its interior was lightly remodeled to appear less like a "space walk".

The mall eventually attracted the high-end tenants that it had hoped for. National Geographic stated in its December 2002 issue that "Tysons Galleria is the Rodeo Drive of the East Coast." The Washington Post describes it as a "bright and elegant Fifth Avenue-like mall". Tysons Galleria was rated one of the top 15 sales-producing shopping centers in terms of dollars per square foot by WWD in 2003. 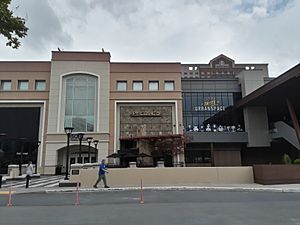 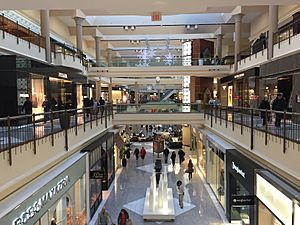 Tysons Galleria features valet parking and concierge services, including having large purchases delivered and organized into customers' closets. The mall has given consistently big-spending customers reserved parking spaces. The Galleria also has foreign currency exchanges, day spas, security escorts, and taxi services. An adjacent Ritz-Carlton hotel is accessible from inside the mall, much like in the nearby Fashion Centre at Pentagon City in Arlington. The hotel attracts wealthy visitors from Europe, the Middle East, and the Far East, who in turn help fuel sales of the mall's high-end goods.

FAO Schwarz operated a three-level store that closed in 2001. The mall also had one of the original locations of Tiffany & Co.'s Iridesse.

Several designers, including Bottega Veneta, Chanel, David Yurman, De Beers, Elie Tahari, Salvatore Ferragamo, Tory Burch, and Versace, have their only statewide and Baltimore-Washington area boutiques in Tysons Galleria. Similarly, some high-end watch makers, including Breguet and Girard-Perregaux, have their only regional point of sale in Tysons Galleria.

Until its closure, the Macy's at Tysons Galleria was located across the street from the Macy's in neighboring Tysons Corner Center (which was originally a Hecht's).

All content from Kiddle encyclopedia articles (including the article images and facts) can be freely used under Attribution-ShareAlike license, unless stated otherwise. Cite this article:
Tysons Galleria Facts for Kids. Kiddle Encyclopedia.