Freeport is a town in Cumberland County, Maine, United States. The population was 7,879 at the 2010 census. Once home to a prominent shipbuilding industry, timber operations, and farming, it is now known for its numerous outlet stores; Freeport is home to L.L. Bean, Wolfe's Neck Woods State Park, and the Desert of Maine.

Freeport is part of the Portland–South Portland–Biddeford, Maine metropolitan statistical area. The Harraseeket Historic District is in Freeport.

The town was once a part of North Yarmouth called Harraseeket, after the Harraseeket River. First settled about 1700, it was set off and incorporated on February 14, 1789 as Freeport. It is probably named "from the openness of its harbor" (free from ice). Freeport developed as four villages—Mast Landing, Porter's Landing, South Freeport and Freeport Corner—all of which are now part of the Harraseeket Historic District, listed on the National Register of Historic Places.

At the head of tide on the Harraseeket River is Mast Landing, from which timber was shipped, particularly for use as masts. The estuary was dammed to provide water power for a gristmill, sawmill and fulling mill, with modest manufacturing and woodworking. Porter's Landing was involved in shipbuilding, important in Freeport following the Revolutionary War. The industry reached its peak in the decade between 1850 and 1860, but declined with the Civil War. South Freeport, the largest of the waterfront villages, once had four shipyards. Other businesses included fishing, canning and farming. In 1903, the Casco Castle and Amusement Park was built here by Amos Gerald to encourage travel by trolley cars. The hotel burned in 1914, but its tower still stands. Freeport Corner was an inland village for farming and trade, but the 1849 entrance of the railroad helped it develop into the town's commercial center, which it remains. In the 1800s, fabric was sent from New York and Boston to be made into clothing by local piece workers. Businessman E. B. Mallet established here a sawmill, brickyard, granite quarry and large shoe factory.

In 1912, Leon Leonwood Bean opened a store in the basement of his brother's apparel shop at Freeport Corner, selling the "Bean Boot" (or Maine Hunting Shoe). This store, L. L. Bean, became so popular that in 1951 it started remaining open 24 hours a day. Its retail and mail order catalog facilities expanded into Freeport's principal business, and a worldwide company with annual sales of over a billion dollars.

In 1982, McDonald's made plans to tear down an 1850s Greek Revival house to build one of its standard stores. Outcry from residents caused the town to adopt new ordinances concerning what businesses could and couldn't do with their buildings, and McDonald's built the restaurant inside the house, maintaining the exterior appearance. This was one of the first times that McDonald's had been forced to change its restaurant design to fit local requirements.

This climatic region is typified by large seasonal temperature differences, with warm to hot (and often humid) summers and cold (sometimes severely cold) winters. According to the Köppen Climate Classification system, Freeport has a humid continental climate, abbreviated "Dfb" on climate maps.

Both U.S. 1 and Interstate-295 run directly through Freeport, the latter with three and a half exits.

There were 3,209 households, of which 32.6% had children under the age of 18 living with them, 55.8% were married couples living together, 8.2% had a female householder with no husband present, 3.7% had a male householder with no wife present, and 32.3% were non-families. Of all households, 25.1% were made up of individuals, and 10% had someone living alone who was 65 years of age or older. The average household size was 2.40 and the average family size was 2.89. 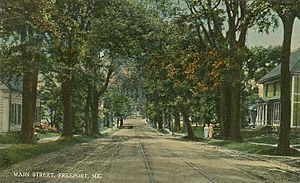 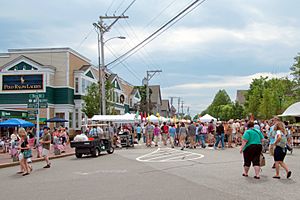 Freeport is part of Regional School Unit #5. Becky Foley is the Superintendent.

All content from Kiddle encyclopedia articles (including the article images and facts) can be freely used under Attribution-ShareAlike license, unless stated otherwise. Cite this article:
Freeport, Maine Facts for Kids. Kiddle Encyclopedia.