Kids Encyclopedia Facts
For those of a similar name, see Donald McMillan (disambiguation).

Donald Baxter MacMillan (November 10, 1874 – September 7, 1970) was an American explorer, sailor, researcher and lecturer who made over 30 expeditions to the Arctic during his 46-year career. He pioneered the use of radios, airplanes, and electricity in the Arctic, brought back films and thousands of photographs of Arctic scenes, and put together a dictionary of the Inuktitut language.

Born in Provincetown, Massachusetts in 1874, MacMillan lived in Freeport, Maine after the deaths of both his parents in 1883 (his father died while captaining a Grand Banks fishing schooner) and 1886 (his mother died suddenly), and was educated at Bowdoin College in Brunswick, graduating in 1898 with a degree in geology. He later taught at Worcester Academy from 1903 to 1908.

On March 18, 1935, MacMillan married Miriam Norton Look, the daughter of his long-time friends Jerome and Amy Look. Though MacMillan at first refused to let her accompany him north, Miriam soon convinced him of her willingness and ability to participate in his Arctic travels. She participated in several of his scientific and exploration trips to the Arctic and elsewhere. 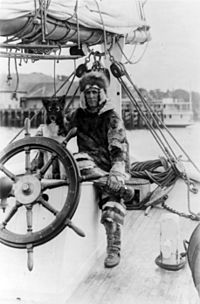 After five years as a high school teacher, MacMillan caught the attention of explorer and fellow Bowdoin graduate Robert E. Peary when he saved the lives of nine shipwrecked people in two nights. Peary subsequently invited MacMillan to join his 1908 journey to the North Pole. Although MacMillan himself had to turn back at 84°29' on March 14 because of frozen heels, Peary allegedly reached the Pole 26 days later.

MacMillan spent the next few years traveling in Labrador, carrying out ethnological studies among the Innu and Inuit. He organized and commanded the ill-fated Crocker Land Expedition to northern Greenland in 1913. Unfortunately Crocker Land turned out to be a mirage. The expedition members were stranded until 1917, when Captain Robert A. Bartlett of the ship Neptune finally rescued them.

On December 24, 1918, shortly after the armistice which ended the First World War, MacMillan was commissioned an ensign in the Naval Reserve Flying Corps. MacMillan was 44 years old at the time, making him one of the oldest ensigns in the history of the U.S. Navy. After the war, MacMillan began raising money for another Arctic expedition. In 1921, the schooner Bowdoin—the namesake of MacMillan's alma mater—was launched from East Boothbay, Maine and set sail for Baffin Island, where MacMillan and his crew spent the winter. The expedition was notable for taking along an amateur radio operator, Don Mix, who used station WNP ("Wireless North Pole") to keep them in contact with the outside world.

In 1923 there was concern about a new ice age and he again sailed toward the North Pole aboard the Bowdoin, sponsored by the National Geographical Society to look for evidence of advancing glaciers.

In 1925 MacMillan led a scientific expedition backed by the National Geographical Society and financed primarily by the Chicago entrepreneur Eugene McDonald - which was accompanied by U.S. Navy personnel and planes commanded by Lt. Cmdr. Richard E. Byrd. The planes were to be used for aerial surveys of Baffin and Ellesmere Islands, investigation of the Greenland icecap, and reconnaissance of previously unexplored areas of the Arctic Sea. The aerial results proved to be disappointing due to severe weather conditions, unreliable engines and inadequate navigational tools (although Byrd would use this experience in preparing for his attempt to reach the North Pole the following year). The expedition is noted for the successful demonstration of SW radio in communications from the Arctic Region.

In September 1926 MacMillan led a group of explorers which included three women and five scientists to Sydney, Nova Scotia. The team spent several months beforehand collecting flora and fauna in Labrador and Greenland. He believed it was possible that the ancient ruins off Sculpin Island, twenty miles from Nain, Labrador, are the remains of a Norse settlement 1,000 years old. On the side bordering the mainland MacMillan found what he considered the vestiges of ten or twelve houses. He estimated the age of the dwellings to be hundreds of years old according to the lichens which partially covered their foundations. However MacMillan could not say for certain if these had been built by Vikings. According to Inuit tradition the "stone igloos" were constructed by men who came from the sea in ships. Inuit called the site Tunitvik, meaning the place of the Norseman. MacMillan said the strongest argument that the Sculpin dwellings were of Viking origin was their resemblance to those he found in Greenland the previous year.

MacMillan was placed on the Naval Reserve Honorary Retired List with the rank of lieutenant commander on his 64th birthday in 1938. Despite being past retirement age, he volunteered for active duty with the Navy during World War II. On May 22, 1941, he transferred the Bowdoin to the Navy for the duration of the war and served as her initial commanding officer before being transferred to the Hydrographic Office in Washington, DC. He was promoted to the rank of commander on June 13, 1942.

After the war, MacMillan continued his trips to the Arctic, taking researchers north and carrying supplies for the MacMillan-Moravian School he established in 1929. On June 25, 1954 MacMillan was promoted, by a special act of Congress, to rank of rear admiral on the Naval Reserve retired list in honor of his lifetime of service and achievement.

Admiral MacMillan made his final trip to the Arctic in 1957 at age 82, and died in 1970 at the age of 95. He is buried in Provincetown, Massachusetts, where a main wharf is named after him.

MacMillan Pier in Provincetown, Massachusetts is named in his honor.

The bagpipe band at Robert E. Peary High School in Rockville, Maryland was formed and named after him with his permission in 1961. The adult MacMillan Pipe Band continues to this day, formed by the graduates of the high school pipe band.

All content from Kiddle encyclopedia articles (including the article images and facts) can be freely used under Attribution-ShareAlike license, unless stated otherwise. Cite this article:
Donald Baxter MacMillan Facts for Kids. Kiddle Encyclopedia.