Robert Edwin Peary Sr. (May 6, 1856 – February 20, 1920) was an American explorer and United States Navy officer who made several expeditions to the Arctic in the late 19th and early 20th centuries. He is best known for claiming to have reached the geographic North Pole with his expedition on April 6, 1909.

Peary was born in Cresson, Pennsylvania, but following his father's death at a young age, was raised in Portland, Maine. He went to a prominent boarding school called Loomis Chaffe. He attended Bowdoin College, then joined the National Geodetic Survey as a draftsman. Peary enlisted in the navy in 1881, as a civil engineer. In 1885, he was made chief of surveying for the Nicaragua Canal (which was never built). Peary visited the Arctic for the first time in 1886, making an unsuccessful attempt to cross Greenland by dogsled. He returned in 1891 much better prepared, and by reaching Independence Fjord (in what is now known as Peary Land) proved conclusively that Greenland was an island. He was one of the first Arctic explorers to study Inuit survival techniques. During an expedition in 1894 he was the first Western explorer to reach the Cape York meteorite and its fragments, which were subsequently taken from the native Inuit population who had relied on it for creating tools. During that same expedition, Peary deceived six indigenous individuals, one of them Minik Wallace, to travel to America with him by promising they would be able to return with tools, weapons and gifts within the year. This promise would be unfulfilled, with four of the six dying of illnesses within a few months.

On his 1898–1902 expedition, Peary set a new "Farthest North" record by reaching Greenland's northernmost point, Cape Morris Jesup. Peary made two further expeditions to the Arctic, in 1905–1906 and in 1908–1909. During the latter, he claimed to have reached the North Pole. Peary received a number of awards from geographical societies during his lifetime, and in 1911 received the Thanks of Congress and was promoted to rear admiral. He served two terms as president of The Explorers Club and retired.

Peary's claim to have reached the North Pole was widely debated in contemporary newspapers (along with a competing claim made by Frederick Cook), but eventually won widespread acceptance. In 1989, British explorer Wally Herbert concluded Peary did not reach the pole, although he may have been as close as 60 miles (97 km). His conclusions have been widely accepted, although disputed by some authorities.

He was married to Josephine Diebitsch from 1888 until his death in 1920. They had two children. 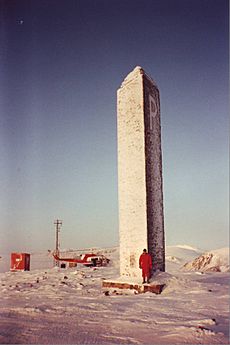 Several United States Navy ships have been named USS Robert E. Peary. The Peary–MacMillan Arctic Museum at Bowdoin College is named for Peary and fellow Arctic explorer Donald B. MacMillan. In 1986, the United States Postal Service issued a 22-cent postage stamp in honor of Peary and Henson; they were previously honored in 1959.

Peary Land, Peary Glacier, Peary Nunatak and Cape Peary in Greenland, Peary Bay and Peary Channel in Canada, as well as Mount Peary in Antarctica, are named in his honor. The lunar crater Peary, appropriately located at the moon's north pole, is also named after him.

Camp Peary in York County, Virginia is named for Admiral Peary. Originally established as a Navy Seabee training center during World War II, it was repurposed in the 1950s as a Central Intelligence Agency training facility. It is commonly called "The Farm".

Admiral Peary Vocational Technical School, located in a neighboring community very close to his birthplace of Cresson, PA, was named for him and was opened in 1972. Today the school educates over 600 students each year in numerous technical education disciplines.

Major General Adolphus Greely, leader of the ill-fated Lady Franklin Bay Expedition from 1881 to 1884, noted that no Arctic expert questioned that Peary courageously risked his life traveling hundreds of miles from land, and that he reached regions adjacent to the pole. After initial acceptance of Peary's claim, he later came to doubt Peary's having reached 90°.

In his book Ninety Degrees North, polar historian Fergus Fleming describes Peary as "undoubtedly the most driven, possibly the most successful and probably the most unpleasant man in the annals of polar exploration".

In 1932, an expedition was made by Robert Bartlett and Peary's daughter, Marie Ahnighito Peary Stafford on the Effie M. Morrissey to erect a monument to Peary at Cape York, Greenland.

All content from Kiddle encyclopedia articles (including the article images and facts) can be freely used under Attribution-ShareAlike license, unless stated otherwise. Cite this article:
Robert Peary Facts for Kids. Kiddle Encyclopedia.