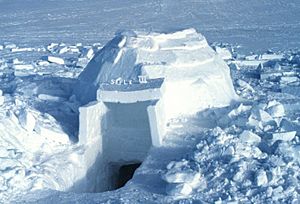 Drawing of some parts of basic igloos: 1. living area, 2. tunnel to crawl in and out 3. window (hole to look out) 4. air hole

An igloo (or iglu) is a shelter (a place for people to stay warm and dry) made from blocks of snow placed on top of each other, often in the shape of a dome (like half of a hollow ball). They were used in winter as temporary shelters by hunters when they were away from their regular homes.

There are three traditional types of igloos, all of different sizes and used for different purposes.

The snow used to build an igloo must have enough structural strength to be cut and stacked appropriately. The best snow to use for this purpose is snow which has been blown by wind, which can serve to compact and interlock the ice crystals. The hole left in the snow where the blocks are cut is usually used as the lower half of the shelter.

Sometimes, a short tunnel is constructed at the entrance to reduce wind and heat loss when the door is opened. Snow's effective insulating properties enable the inside of the igloo to remain relatively warm. In some cases, a single block of clear ice is inserted to allow light into the igloo. Animal skins were used as door flaps to keep warm air in. Igloos used as winter shelters had beds made of ice and caribou furs.

Architecturally, the igloo is unique in that it is a dome that can be raised out of independent blocks leaning on each other and polished to fit without an additional supporting structure during construction. An igloo that is built correctly will support the weight of a person standing on the roof. The sleeping platform is a raised area. Because warmer air rises and cooler air settles, the entrance area acts as a cold trap whereas the sleeping area will hold whatever heat is generated by a stove, lamp, body heat, or other device.

All content from Kiddle encyclopedia articles (including the article images and facts) can be freely used under Attribution-ShareAlike license, unless stated otherwise. Cite this article:
Igloo Facts for Kids. Kiddle Encyclopedia.