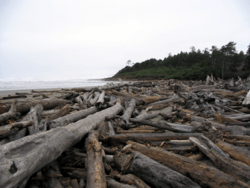 An expanse of driftwood along the northern coast of Washington state. 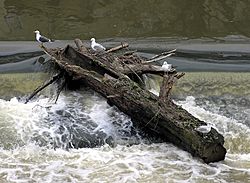 Driftwood caught on a weir of the River Avon, Bath, England

Driftwood is wood that has been washed onto the shore of a sea, river, or lake by winds, tides, waves or man.

In some waterfront areas, driftwood is a major nuisance. However, the driftwood provides shelter and food for birds, fish and other aquatic species as it floats in the ocean. Gribbles, shipworms and bacteria decompose the wood and gradually turn it into nutrients that are reintroduced to the food web. Sometimes, the partially decomposed wood washes ashore, where it also shelters birds, plants, and other species. Driftwood can become the foundation for sand dunes.

According to Norse mythology, the first humans, Ask and Embla, were formed out of two pieces of driftwood, an ash and an elm, by the god Odin and his brothers, Ve and Vili.

Driftwood carried by Arctic rivers was the main, or sometimes only, source of wood for some Inuit and other Arctic populations living north of the tree-line until they came into regular contact with European traders.

Many people use driftwood as parts of decorative furniture or other art forms, and it is a popular element in the scenery of fish tanks.

All content from Kiddle encyclopedia articles (including the article images and facts) can be freely used under Attribution-ShareAlike license, unless stated otherwise. Cite this article:
Driftwood Facts for Kids. Kiddle Encyclopedia.