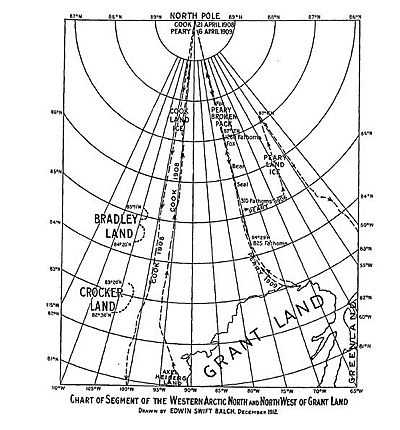 Crocker Land is the name for a supposed eighth continent in the Arctic Ocean. In the year 1906, Robert Peary thought he had seen a landmass, which he named after George Crocker, a member of Peary Arctic Club. He thought that the land was about 130 miles (210 km) north of Ellesmere Island, at 83 degrees north and 100 degrees west.

In 1913, the Crocker Land expedition started, to find Crocker Land. This expedition turned out to be a failure. The captain of the first ship became drunk and ran aground on the rocks. Later an Inuit guide was deliberately shot and killed by one of the expedition members under suspicious circumstances. The expedition eventually became stranded and was not rescued until four years later.

The MacGregor Arctic Expedition in 1937–1938 also took aerial photographs. These show that there is no land at that location. Despite this, some pseudo-scientific organizations still try to present a case for its possible existence.

The expedition did not find Crocker Land. Later, satellite images showed that the continent did not exist, and could not be found. Today, it is believed that what Peary saw, was a fata morgana mirage.

All content from Kiddle encyclopedia articles (including the article images and facts) can be freely used under Attribution-ShareAlike license, unless stated otherwise. Cite this article:
Crocker Land Facts for Kids. Kiddle Encyclopedia.