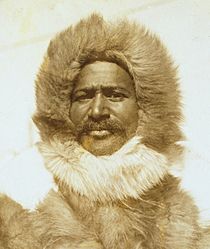 Matthew Alexander Henson (August 8, 1866 – March 9, 1955) was an American explorer and assistant of Robert Peary on various expeditions, the most famous being a 1909 expedition during which he may have been the first person to reach the Geographic North Pole.

All content from Kiddle encyclopedia articles (including the article images and facts) can be freely used under Attribution-ShareAlike license, unless stated otherwise. Cite this article:
Matthew Henson Facts for Kids. Kiddle Encyclopedia.