Nanjemoy is a settlement along Maryland Route 6 in southwestern Charles County, Maryland, United States, and the surrounding large rural area more or less bounded by Nanjemoy Creek to the east and north, and the Potomac River to the south and west.

Nanjemoy is within the Washington, D.C., metropolitan area, being about 25 miles (40 km) south of the Capital Beltway (Interstates 95 and 495).

The area is served by Maryland Route 6 and other two-lane state highways; the nearest major roads are Maryland Route 210 to the north and U.S. Route 301 to the east. The Nanjemoy area is becoming increasingly popular with Washington-area commuters, particularly those working in nearby Indian Head or Fort Washington in Maryland or in Alexandria, Virginia. The Waldorf, Maryland, commercial area is nearby to the east, along U.S. 301. No rail lines presently serve the area. Other settlements in the Nanjemoy area include Grayton, Maryland Point, and Riverside. Chickamuxen, Doncaster, and Ironsides are nearby to the north. 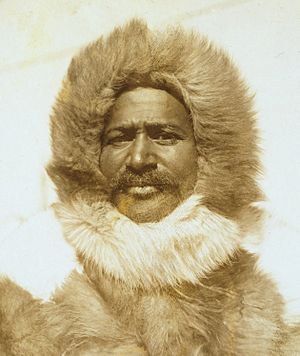 Nanjemoy and the creek draw their names from a Native American tribe. The Southern-sympathizing area saw occupation by a large force of the Union army during the early part of the American Civil War, with an encampment of about 12,000 soldiers near Chicamuxen, a few miles (kilometers) north of the Nanjemoy area.

In the last years of World War I, the Allied sea-power had been weakened by German submarines. The U.S. military contracted wooden ships, many were built, anchoring in Widewater, Virginia, but the war ended, before they could be used. Most ships were moved across the Potomac river to a secluded bay called Mallows Bay which served as a junkyard, some deconstructed most sunk. In 1970 a representative from the Audubon Society testified that the wrecks had become an "integral part of the ecosystem." In the 1990s the area was found to contain longboats from the Revolutionary era and modern ships. In 2002, Mallows Bay was protected for the state of Maryland, and in November 2015 the site was nominated as a National Marine Sanctuary.

The sunken hulls of dozens of scrapped wooden boats are still visible at low tide at Mallows Bay in the Nanjemoy area, the location of what is regarded as the "largest shipwreck fleet in the Western Hemisphere"

Famous people born in Nanjemoy include Raphael Semmes, captain of the Confederate cruiser "Alabama", and Matthew Henson, with whom Robert Peary explored the Arctic in 1909 and with Peary may have discovered the North Pole. 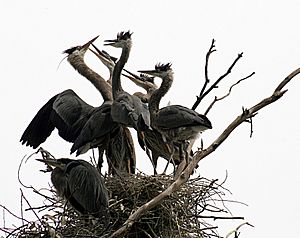 Great blue herons at a nest 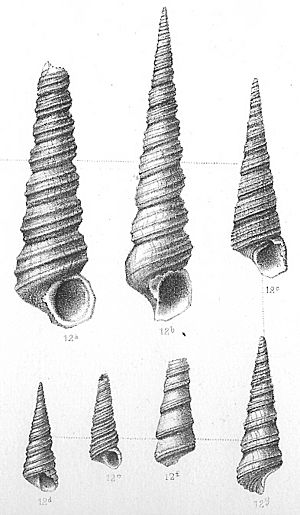 Fossil specimens of a Turritella snail

The Nanjemoy area, on the Atlantic Coastal Plain, includes the largest great blue heron (Ardea herodias) rookery in the Eastern United States north of Florida, now a preserve owned and managed by The Nature Conservancy.

The Nanjemoy Creek Environmental Education Center, operated by the Charles County Public School system, is located along Nanjemoy Creek. It offers trails, a boardwalk through a freshwater tidal marsh, a pier, a pavilion, a laboratory building, and several cabins for use by school groups. An observatory there, operated by the Southern Maryland Astronomical Society, has a dome formerly used nearby at a U.S. Naval Research Laboratory facility.

Hunting and fishing have long been popular in the relatively undeveloped Nanjemoy area, and many miles of remote hiking trails are available. More recently, the area's scenic, little-traveled roads have become popular with cyclists.

Public boat landings are provided on the Potomac at Mallows Bay and on the estuarine portion of Nanjemoy Creek at Friendship Landing, the latter also popular for fishing. Recreational boaters, mostly from the Woodbridge and Quantico areas on the Virginia side of the Potomac, frequently visit the extensive undeveloped river shore in the Purse State Park area. Kayaking is also increasing in popularity in the area, both on the Potomac and on the quiet tidewaters of Nanjemoy Creek.

All content from Kiddle encyclopedia articles (including the article images and facts) can be freely used under Attribution-ShareAlike license, unless stated otherwise. Cite this article:
Nanjemoy, Maryland Facts for Kids. Kiddle Encyclopedia.