Waldorf is an unincorporated community and census-designated place in Charles County, Maryland, United States. It is 23 miles (37 km) south-southeast of Washington, D.C. The population of the census-designated area (now including the large planned community of St. Charles) was 67,752 at the 2010 census. Waldorf was settled before 1900 as a rural crossroads with a train station and was called "Beantown" after a local family. 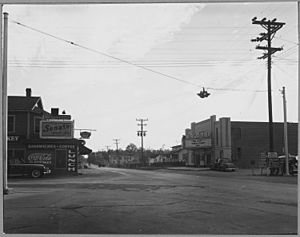 Waldorf's original name was Beantown. During his post assassination flight, John Wilkes Booth told a road sentry he was headed to his home in Charles County near Beantown and was allowed to proceed. In 1880, the General Assembly of Maryland by an act changed the name to "Waldorf" in honor of William Waldorf Astor (1848–1919), the great-grandson of John Jacob Astor (1763–1848), who was born in Walldorf, Palatinate, Germany. On July 29, 1908, the city of Plumb Valley in Waseca County, Minnesota, changed its name to Waldorf after Waldorf, Maryland.

Once a tobacco market village, Waldorf came to prominence in the 1950s as a gambling destination after slot machines were legalized in Charles County in 1949. The boom lasted until 1968 when gambling was once again outlawed. Its subsequent substantial growth as a residential community began with a 1970 loan package from the Department of Housing and Urban Development which fueled the giant planned community of St. Charles, south of Waldorf.

St. Catharine, or the Dr. Samuel A. Mudd House, was listed on the National Register of Historic Places in 1974.

Waldorf is predominantly a bedroom community for many residents who commute to work at other points in the Washington, D.C., metropolitan area, especially personnel at Andrews Air Force Base. Waldorf's local jobs are primarily in the service and sales industry. Nearby St. Charles Towne Center, a 2-story shopping mall, opened in 1988 which has advanced science/technology programs; the Capital Clubhouse 24-hour indoor sports complex and ice rink also opened that year. A fourth public high school opened in 2014 called St. Charles High School. Thomas Stone and Westlake High Schools are also located in Waldorf. Waldorf has a branch of the College of Southern Maryland. In 2006, plans were announced to build two more shopping centers, including one with high-end stores and an attractive "lifestyle" town center design layout. The Southern Maryland Blue Crabs baseball team is also in Waldorf.

Most of Waldorf is flat, particularly the eastern part of the city. There are small hills to the west, and much of the southern and eastern parts of the city are wetlands, featuring very diverse wildlife in ponds and streams. Waldorf is forested, mostly with oak and pine trees.

Even though Waldorf is a rapidly developing urbanized area, the community is surrounded by farms. These farms include:

Tobacco, once a dominant crop in Southern Maryland, has nearly disappeared as a crop grown by farmers, since most area farmers accepted buy-outs during the 1990s from the Maryland state government.

Waldorf's neighbors are as follows: Prince George's County (north), Bennsville (west), La Plata (south). On the east, from north to south there are Cedarville State Forest, Malcolm and Bryantown.

The climate in this area is characterized by hot, humid summers and generally mild to cool winters. According to the Köppen Climate Classification system, Waldorf has a humid subtropical climate, abbreviated "Cfa" on climate maps.

There were 7,603 households out of which 45.5% had children under the age of 18 living with them, 58.6% were married couples living together, 15.5% had a female householder with no husband present, and 21.2% were non-families. 14.8% of all households were made up of individuals and 2.2% had someone living alone who was 65 years of age or older. The average household size was 2.93 and the average family size was 3.24.

The major routes in Waldorf are:

The Governor Harry W. Nice Memorial Bridge on Route 301 provides a road connection from Waldorf to Virginia. Although the bridge is outmoded and narrow (2-lane), it is nevertheless used by some long-distance East Coast through-motorists as a travel alternative to Interstate 95/495 which often has major traffic backups (see Woodrow Wilson Bridge). In the years to come, due to traffic concerns, a bypass may be built through either western or eastern Waldorf, or the highway may continue on the same route through Waldorf with overpasses. This will give an interstate feel to the Waldorf area and ultimately take away traffic congestion to the north-south routes in Waldorf.

Public transportation is provided by Van-Go, a bus system administered by Charles County for most of the county, including Waldorf, and interconnecting to nearby St.Mary's County Transit System buses. MTA Maryland has four commuter routes (901, 903, 905, and 907, all operated by Dillons Transportation except the 903 which is serviced by Keller Transportation) that takes commuters to and from downtown Washington, D.C., and ridership is rapidly growing. Waldorf has seven park & ride lots served by MTA Maryland routes: two at St. Charles Towne Center, one at St. Charles Towne Plaza, one at Smallwood Drive and US 301, one on Mattawoman Beantown Road, one at Smallwood Village Center, and one at Regency Furniture Stadium.

Vehicular traffic in Waldorf is usually congested, and the state is still evaluating options for a U.S. Route 301 bypass around western Waldorf. Through Virginia and Maryland, US 301 along with U.S. Route 17 are used as alternate routes from I-95, due to I-95 vehicular traffic congestion. Due to Waldorf's bedroom community nature and lack of any significant hometown industry, its highways can become very congested in the morning commutes north to Washington, and also on Friday through Sunday in every direction due to shoppers, many of them visiting from other counties. Much of the congestion is seen at the intersection of Route 228 and 301 and Community Drive, on Berry Road going westward to Western Parkway, near St. Patrick's Drive, on Mall Circle surrounding St. Charles Towne Center, and on Smallwood Drive near the neighborhood of Carrington. Most vehicular traffic is in the southern areas of Waldorf. The Maryland Transit Administration is currently working with Prince George's County and Charles County in planning a transit line called Southern Maryland Rapid Transit, which would connect Waldorf to the Branch Avenue station of the Washington Metro.

All content from Kiddle encyclopedia articles (including the article images and facts) can be freely used under Attribution-ShareAlike license, unless stated otherwise. Cite this article:
Waldorf, Maryland Facts for Kids. Kiddle Encyclopedia.