Cumberland is a town in Cumberland County, Maine. The population was 7,211 at the time of the 2010 census. It is part of the Portland metropolitan area, Maine. Cumberland is one of the wealthiest municipalities in the state. 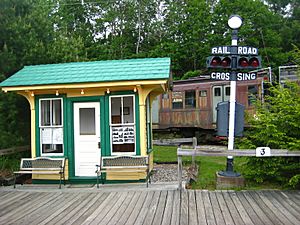 The former Morrrison Hill station of the Portland-Lewiston Interurban, which served Cumberland from 1915 to 1933. The station is now located at Seashore Trolley Museum.

Cumberland, Maine (also known as Cumberland Center), was once part of North Yarmouth, but in 1821, it was incorporated as its own town. The town was officially named by Ephraim Sturdivant when the new town government elected him to do the task.

The Cumberland Fair, one of the state's larger agricultural fairs, has been held yearly in Cumberland at the end of September since 1868. This Portland suburb has a rich farming history, but only a small number of working farms remain, such as Sweetser's Apple Barrel & Orchards, Spring Brook Farms, and Double T Orchards. Chebeague Island, long a part of Cumberland, formed its own town in 2007.

Near the center of the town, there is a small recreational park called Twin Brook. Run and maintained by the town, it is open to cross-country skiers, walkers, and sports practices. Local ballfields at Drowne Road School host the local Little League teams.

Cumberland has a few small businesses, some of which are on Route 26, also called the Gray Road. Across Main Street from the high school, there is a convenience store called Food Stop. New construction has brought two eateries to the town, Cumberland Food Company and Louie's Grille, family owned and run. There are also two dentists' offices and a post office. A new bank was built in 2010. The Cumberland Congregational Church is located in the center of the town.

There were 2,697 households, of which 37.9% had men under the age of 18 living with them, 67.4% were married couples living together, 6.5% had a female householder with no husband present, 3.2% had a male householder with no wife present, and 22.9% were non-families. 18.9% of all households were made up of individuals, and 9% had someone living alone who was 65 years of age or older. The average household size was 2.67 and the average family size was 3.06.

All content from Kiddle encyclopedia articles (including the article images and facts) can be freely used under Attribution-ShareAlike license, unless stated otherwise. Cite this article:
Cumberland, Maine Facts for Kids. Kiddle Encyclopedia.