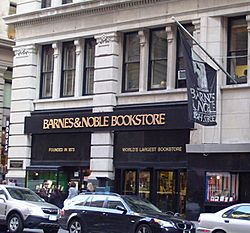 Barnes & Noble's flagship store at 105 Fifth Avenue in Manhattan, New York has been operating since 1932.

Barnes & Noble, Inc. is the largest bookseller in the United States. It operates mostly through its Barnes & Noble Booksellers chain of bookstores which is based in lower Fifth Avenue in Lower Manhattan, New York City. Barnes & Noble also operated the chain of small B. Dalton Booksellers stores in malls until they announced the liquidation of the chain.

The company is known for large, upscale retail stores. Many of them contain a café serving Starbucks Coffee. Most stores also sell magazines, newspapers, DVDs, graphic novels, gifts, games, and music. Video games and related items were sold in the company's GameStop retail outlets until October 2004. Then, the division was made into its own company.

As of October 2009, the company operates 777 stores in all 50 U.S. states and the District of Columbia. It also has 636 college bookstores, which serves nearly 4 million students and 250,000 faculty members across the country.

Barnes & Noble began in 1873 when Charles Barnes opened a book-printing business in Wheaton, Illinois. Their first true bookstore was set up by his son, William, with G. Clifford Noble, in 1917 in New York City. The original bookstore was at 31 West 15th St., and opened during World War I. In 1932, at the height of the Great Depression, the bookstore was moved to its current location on 18th Street and Fifth Avenue.

The business was bought in 1971 by Leonard Riggio. He oversaw the growth of the business. In 1974, Barnes & Noble became the first bookstore to advertise on television. A year later, the company became the first bookseller in America to discount books. It sold New York Times best-selling titles at 40% off the publishers’ list price. During the 1970s and 1980s, Barnes & Noble opened smaller discount stores. These were eventually phased out in favor of larger stores. They also began to publish their own books to be sold to mail-order customers. These titles were mostly low price reissues of out-of-print titles. Selling them through mail-order catalogs allowed Barnes & Noble to reach new customers nationwide.

Barnes & Noble continued to expand throughout the 1980s. In 1987 it purchased the mostly shopping mall-based B. Dalton chain from Dayton Hudson. The last B. Dalton stores closed in January 2010. The purchase of 797 bookstores turned the company into a nationwide retailer. As of the end of fiscal year 1999, the second-largest online bookseller in the United States. B&N's critics claim that it has added to the decline of local and independent booksellers.

It first began selling books online in the late 1980s, but the company’s website was not launched until May 1997. The site now carries over 1 million titles.

Steve Riggio is vice chairman of the company and served on the board of directors. Riggio began his career at Barnes & Noble in 1975 after graduating from Brooklyn College. After getting his start in the buying and merchandising departments, he became general manager and vice president of the company’s direct mail division. He held this position from 1981 to 1987. Riggio became executive vice president of merchandising in 1987. Then, in 1995, he was appointed chief operating officer. He was appointed CEO in January 2003 and held that position till March 2010. In addition to his career at Barnes & Noble, Riggio serves on the board of directors of the National Book Foundation, Association for the Help of Retarded Children and the National Down Syndrome Society. According to Forbes.com, in 2007 Riggio’s salary is $786,358 a year. He also earns $2,323,942 in other long-term payments, for a yearly grand total of $3,110,480.

Barnes & Noble publishes some of the books it sells. It reprints non-copyrighted titles or gets the American or English language rights from another publisher. In addition, Barnes & Noble pays for reprint anthologies and omnibus editions using in-house editors.

Barnes & Noble began to publish books during the 1980s, when they started reissuing out-of-print titles. One of these titles, The Gentle Art of Verbal Self-Defense by Suzette Haden Elgin, has sold over 250,000 copies. The reissued edition of The Columbia History of the World by John Garrity has sold over 1 million copies. 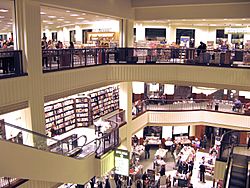 The interior of the Barnes & Noble at The Grove at Farmers Market, Los Angeles 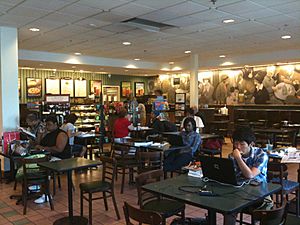 The first store to feature a café serving Starbucks beverages was in Springfield, New Jersey in 1993. Since then, most stores have been changed or built specifically to feature a cafe. The cafes serve Starbucks beverages, Harney & Sons or Tazo Tea, FIJI Bottled Water, bakery goods from The Cheesecake Factory, candy from Godiva Chocolatiers, sandwiches and other specialty products. Although the cafés are owned and operated by Barnes & Noble, servers follow Starbucks' standards in beverage preparation.

In 2004, Barnes & Noble began offering Wi-Fi in the café area of selected stores, using the AT&T FreedomLink network. All 777 stores currently offer Wi-Fi, an effort which was completed in 2006. As of July 27, 2009, Wi-Fi is offered for free to all customers.

Barnes & Noble hires community relations managers to engage in community outreach. The tasks of these managers include organizing in-store events, such as author appearances, children’s storytimes and book groups. Community relations managers work closely with local schools and groups for the promotion of literacy and the arts. One of the things that Barnes & Noble does in the community is sponsor a children's summer reading program that promotes literacy and puts over 2 million books into the hands of the children each year. To promote nationwide literacy among 1st to 6th graders and encourage more reading during the summer, Barnes & Noble has started a summer challenge where if children read 8 books and write about their reading, Barnes & Noble will give the readers a free book.

Barnes & Noble Nook is an electronic book reader created by the company, based on the Android platform. The device was announced in the United States on 20 October 2009. It was released 30 November 2009 for US$259. nook competes with the Amazon Kindle, Sony Reader, and other readers, and includes Wi-Fi and AT&T 3G wireless connectivity, a six-inch E Ink display, and a separate, smaller color touchscreen that serves as the primary input device.

Barnes & Noble College Booksellers, Inc. is a part of the company which operates bookstores at more than 600 colleges. College Bookstores was previously owned by company chairman Leonard Riggio. It is based in Basking Ridge, New Jersey.

Barnes & Noble College Booksellers says that its store at Fifth Avenue and 18th Street in New York City is the "world's largest bookstore". This store carries a large variety of textbooks, medical books, and medical supplies in addition to the various trade titles carried at the company's main stores.