Basking Ridge is an unincorporated community located within Bernards Township in the Somerset Hills region of Somerset County, New Jersey, United States. As of the 2010 Census, the population for the ZIP Code Tabulation Area (ZCTA) 07920 was 26,747.

The area was settled during colonial times. It was home to the old AT&T Headquarters, now operated by Verizon. Basking Ridge is the current headquarters for Collabera, Verizon Wireless, Vencore Labs, Lawyer.com, and Barnes & Noble College Booksellers.

The community of Basking Ridge is part of greater Bernards Township, which also includes the neighborhoods of Liberty Corner, Lyons and West Millington.

Basking Ridge was originally settled in the 1720s by British Presbyterians escaping religious persecution. The land was bought from the Lenape Native Americans.

Bernards Township was officially chartered on May 21, 1760 granted by King George II and granted to Sir Francis Bernard, first governor of the noted section which includes Basking Ridge.

On the morning of December 15, 1776, General Charles Lee was captured by the British at Widow White's tavern. Lee had ranked next to Washington in command.

The downtown area of Bernards Township known as Basking Ridge was added to the New Jersey and National Registries as a Historic District. on August 8, 1974.

As Basking Ridge is not an independent municipality, demographic data is based on the United States Census Bureau figures for the ZIP Code Tabulation Area (ZCTA) for the 07920 ZIP Code.

There were 9,300 households out of which 37.1% had children under the age of 18 living with them, 62.8% were married couples living together, 5.8% had a female householder with no husband present, and 29.9% were non-families. 26.5% of all households were made up of individuals and 9.1% had someone living alone who was 65 years of age or older. The average household size was 2.56 and the average family size was 3.15. 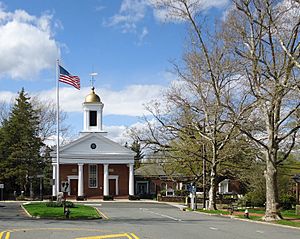 Basking Ridge has an annual event in May called Charter Day. Many rides are set up in the Oak Street field—a bounce house, inflatable race tracks, and spinning rides. Also, in the center of the town hundreds of stands are set up mostly promoting school sports, but there are also many kettle corn stands, which is a traditional food children eat during Charter Day. At night, the traditional Battle of the Bands takes place, which many teenagers sign up for to play their favorite songs. 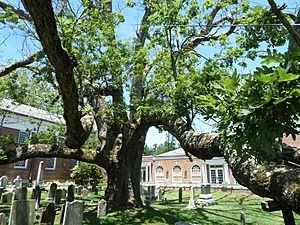 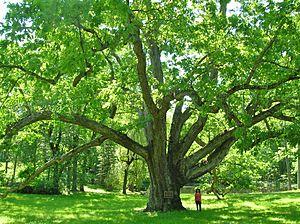 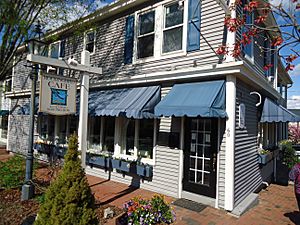 Cafe in the downtown area

Basking Ridge has several properties on the National Register of Historic Places. 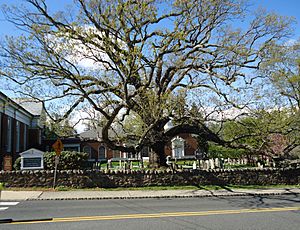 This ancient tree in a church cemetery in Basking Ridge is supported by numerous poles, as well as wires between the branches

There are several parks within the town. Four are county parks: Lord Stirling Park, Rebel Hill, Southard, and Harry Dunham. The fifth is Pleasant Valley Park which contains the town pool and miles of woodchip trails. 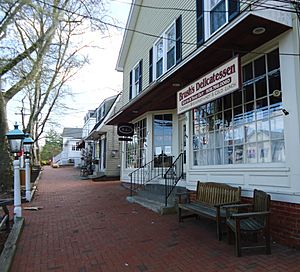 NJ Transit's Gladstone Branch runs through Basking Ridge. There are two stations that residents can use to get to New York City and Hoboken Terminal: 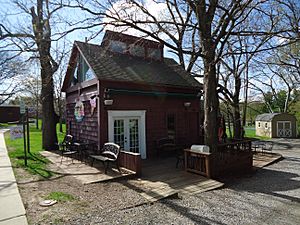 Bernards High School was founded by the Bernards Township Board of Education in 1924. When Bernardsville separated from Bernards Township, the schools still remained one system until 1947 when the original high school became the property of Bernardsville. From 1948, however, township students continued attending Bernards High School as tuition students. In 1960 a contract was issued for the construction of a new Ridge High School and Cedar Hill School which were built on approximately 60 acres (24 ha) of land.

William Annin Middle School was originally named after a colonial patriot who settled in Basking Ridge in 1722. Construction started in 1968 and the school was dedicated on September 28, 1969 as William Annin Junior High School and contained grades 5 through 8. It became a middle school in 1982. It currently contains grades 6 through 8. The school is one of the few in the United States to have a seismograph.

There are four elementary schools in Basking Ridge.

People who were born in, residents of, or otherwise closely associated with Basking Ridge include:

All content from Kiddle encyclopedia articles (including the article images and facts) can be freely used under Attribution-ShareAlike license, unless stated otherwise. Cite this article:
Basking Ridge, New Jersey Facts for Kids. Kiddle Encyclopedia.