Novi ( NOH-vy) is a city in Oakland County in the U.S. state of Michigan. As of the 2010 census, the population was 55,224, an increase over the 2000 census count of 47,386. The city is located approximately 25 miles (40 km) northwest of the center of Detroit, and about 8 miles (13 km) west of the western border of Detroit. It is about 25 miles (40 km) northeast of the center of Ann Arbor. The city is located within the boundaries of the survey township of Novi Township. The remaining unincorporated township is only a tiny fraction surrounded by the city. 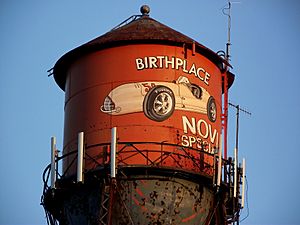 Novi was originally a township organized in 1832 from Farmington Township. The name Novi was offered by resident Dr. J. C. Emery, at the suggestion of his wife. Residents were reportedly looking for a shorter name than Farmington.

One misconception is that it was named after the 6th toll gate (No. VI) on the Grand River toll road. However, the township was named in 1832 and the toll road was not constructed until the 1850s. A similar claim is made about the township being stop number 6 on the railroad. However, the Holly, Wayne & Monroe Railway (now CSX Transportation) was not constructed through the township until 1870–71, almost 40 years after the township was named. A third popular misconception is that Novi was the sixth stagecoach stop outside of Detroit.

The city is located on Walled Lake. Walled Lake, which lies mainly within Novi, is the largest lake in the city. It also serves as the headwaters of the Middle Branch of the Rouge River. Shawood Lake lies southwest of Walled Lake. Several smaller lakes within the city were created by gravel pit mining or as stormwater retention areas. Most of the city lies within the Rouge River watershed. Some areas on the north and west side of the city are part of the Huron River watershed.

Most of the farmland and open spaces present in the mid-20th century have been developed. The exceptions include the Tollgate Farm located at the northwest corner of the intersection of Twelve Mile and Meadowbrook Roads. This farmstead is owned by the Americana Foundation and is currently leased and operated by Michigan State University as an agricultural extension. Lakeshore Park is another prominent natural area. The park is located between Walled Lake and Twelve Mile Road, west of Novi Road. While portions of the park were turned over to a developer to settle a lawsuit, it remains one of the largest municipal parks in southeast Michigan. Ella Mae Power Park, located behind the Novi Civic Center, hosts softball and baseball games and tournaments.

In 2004, the City of Novi negotiated for the donation of several parcels of parkland on the west side of the city. These properties, along with several adjoining parcels owned by the city, preserve 253 acres (1.02 km2) of environmentally sensitive areas in the Huron River watershed. In 2005, the City of Novi was awarded a Michigan Natural Resources Trust Fund (MNRTF) grant to acquire 54 acres (22 ha) two areas of environmentally sensitive property in southeast Novi within the Rouge River watershed. The properties were acquired in 2009. In 2007, the City was awarded a second MNRTF grant to acquire 16 acres (65,000 m2) of natural area in southwest Novi within the headwaters of the Huron River watershed. The property was acquired in 2010. In 2010, the City was awarded a third MNRTF grant to develop the city-owned property on the south end of Walled Lake, once the site of the Walled Lake Casino and Amusement Park, into a public park. That property is now the Pavilion Shore Park

Each year the Japan Festival is held in the city. It is the largest Japan festival in the state.

There were 22,258 households of which 35.2% had children under the age of 18 living with them, 54.1% were married couples living together, 8.6% had a female householder with no husband present, 2.9% had a male householder with no wife present, and 34.4% were non-families. 29.5% of all households were made up of individuals and 9.9% had someone living alone who was 65 years of age or older. The average household size was 2.46 and the average family size was 3.11.

See also: History of the Japanese in Metro Detroit

As of 2011 15.9% of its residents were Asian, and Novi had 2,438 Japanese residents, giving it the largest Japanese population of any Michigan municipality. By 2011 the Japanese population experienced an increase of 53% from 2003, when the city had 1,417 Japanese residents. The economic director of the City of Novi, Ara Topouzian, said "We've been told often by the consulate-general's office or other Japanese officials that they refer to Novi as Little Tokyo because we've been very warm and welcoming and accommodating." Many Japanese in Novi are in the United States on temporary visas which last for three to five years. According to Dr. Andrew Vosburgh of the St. John Providence Health System, many Japanese in Novi work in development, engineering, and research. Their workplaces are located in and around several cities including Novi, Ann Arbor, and Springfield Township. As of April 2013 there are 2,666 Japanese nationals who live in Novi.

The Novi Public Library has Japanese content in the adult and children's sections. The Novi Community School District has enrollment information and other documents available in Japanese. The websites of the City of Novi, the Novi Public Library, and St. John Providence Park Hospital have Japanese welcome messages. The Novi Kroger and the Staybridge Suites extended stay hotel cater to Japanese customers. The hotel stated in 2011 that Japanese make up 30% of its customers, and had increased in a two-year span ending in 2011. The city also has Japanese cultural activities and cultural activities offered in Japanese, including horseback riding lessons conducted in the Japanese language and a Japanese movie night. The hospital offers cultural awareness training for employees, documents translated in Japanese, Japanese translators, and yoga classes conducted in Japanese.

In the 1990s several Japanese automobile firms had opened offices along M-14. Nissan Motor Co. opened its Farmington Hills office in November 1991. In addition, Toyota established a technical center in Ann Arbor. Novi had gained several Japanese restaurants by the mid-1990s. In summer 2011, the Japanese School of Detroit moved to Novi from Birmingham.

See also: History of the Asian Indians in Metro Detroit

The 2008 CNN/Money "Best Places to Live" stated that the city had a significant Asian Indian population. According to the 2000 U.S. Census there were 1,278 ethnic Asian Indians in Novi.

The 25,000-square-foot (2,300 m2) Sri Venkateswara Temple and Cultural Center (SVTCC), built for $10 million, opened in 2013. It is the first Michigan Hindu temple to be named after a southern Indian deity. It had a temporary location for five years before it opened its permanent facility. As of 2013 the temple has a client base of about 3,000 people. The community operating the temple mostly comes from the Indians who speak Telugu. Many of them originate from Andhra Pradesh.

All content from Kiddle encyclopedia articles (including the article images and facts) can be freely used under Attribution-ShareAlike license, unless stated otherwise. Cite this article:
Novi, Michigan Facts for Kids. Kiddle Encyclopedia.