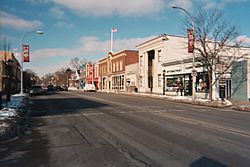 Looking west on Grand River Avenue toward the intersection with Farmington Road. The Farmington Civic Theatre is on the right side of the street.

Farmington is a city in Oakland County of the U.S. state of Michigan. It is one of the northern suburbs of Detroit. As of the 2010 census, the city population was 10,372. It is surrounded by Farmington Hills, except for a small portion bordered by Livonia to the south. Since 2009, the city's downtown has been the center of an extensive renovation and remodeling featuring a refacing or rebuilding of many buildings on Grand River Avenue, as well as brick paver sidewalks, the Farmington Pavilion, new lighting, and landscaping. The area is known for its historic downtown, elegant Victorian-style homes, and one of Michigan's top rated public school systems, Farmington Public Schools. In 2007 CNNMoney.com listed Farmington as number 55 in its Best Places to Live survey. Farmington was also ranked 27th on the list for Best to Live in 2013, citing nearly US$3 million in additional city renovations and development, bumping its rank up.

Farmington was the site of three Native American trails - the Orchard Lake Trail, the Grand River Trail, and the Shiawassee Trail.

Farmington was founded in 1824 by Arthur Power. Like many Oakland County pioneers, he hailed from the state of New York. Power was a Quaker, as were the settlers who joined him, and the town was first known as Quakertown. In 1826 the name Farmington was officially chosen because it was the name of Power's hometown, Farmington, New York.

The name Farmington, which properly refers to the 2.7-square-mile (7.0 km2) municipality incorporated in the early 19th century, is sometimes erroneously used to refer to the 33.3-square-mile (86 km2) neighboring city of Farmington Hills (Farmington Township until 1973), which surrounds it.

In 1976 the National Register of Historic Places declared part of the city the Farmington Historic District.

According to the United States Census Bureau, the city has a total area of 2.66 square miles (6.89 km2), all of it land.

There were 4,624 households of which 28.0% had children under the age of 18 living with them, 45.9% were married couples living together, 10.4% had a female householder with no husband present, and 40.9% were non-families. 35.9% of all households were made up of individuals and 13.7% had someone living alone who was 65 years of age or older. The average household size was 2.22 persons, and the average family size was 2.92.

In 2007 CNNMoney.com listed Farmington as number 55 in their Best Places to Live survey. [1]

All content from Kiddle encyclopedia articles (including the article images and facts) can be freely used under Attribution-ShareAlike license, unless stated otherwise. Cite this article:
Farmington, Michigan Facts for Kids. Kiddle Encyclopedia.