Wellesley is a town in Norfolk County, Massachusetts, United States. It is part of Greater Boston. The population was 27,982 at the time of the 2010 census. It has one of the highest median household and family incomes in Massachusetts. It is best known as the home of Wellesley College, Babson College, and a campus of Massachusetts Bay Community College.

Wellesley's population grew by over 80 percent during the 1920s.

The town designated Cottage Street and its nearby alleys as the historic district in its zoning plan. Most houses in this district were built around the 1860s and qualify as protected buildings certified by the town's historic commission.

The town's historic 19th century inn was demolished to make way for condominiums and mixed-use development in 2006. The Wellesley Country Club clubhouse, which is the building where the town was founded, was demolished in 2008, and a new clubhouse was built. The town's pre-World War II high school building was torn down & replaced, with a brand new high school finished in 2012. The entire 1960s-style Linden Street strip-mall has been replaced by "Linden Square" – a shopping district that includes a flagship Roche Bros. supermarket, restaurants, cafes, clothing stores, along with a mixture of national chains and local shops.

The Census Bureau has also defined the town as a census-designated place with an area exactly equivalent to the town.

There were 8,594 households out of which 39.9% had children under the age of 18 living with them, 67.2% were married couples living together, 7.1% had a female householder with no husband present, and 23.9% were non-families. 20.7% of all households were made up of individuals and 10.5% had someone living alone who was 65 years of age or older. The average household size was 2.70 and the average family size was 3.14.

According to Boston Magazine's yearly "Best Places To Live", Wellesley ranks first in the United States in percentage of adults who hold at least one college degree. In 2009, Wellesley ranked #2 in "America's Most Educated Small Towns" according to Forbes.com. 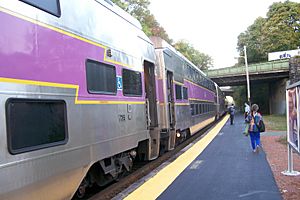 Wellesley has had rail service to Boston since 1833. These days rail service is provided through Wellesley's participation in the MBTA, which offers a total of 17 weekday Commuter Rail trains inbound towards Boston & outbound towards Framingham & Worcester. Wellesley's stations are (east to west) Wellesley Farms, Wellesley Hills, and Wellesley Square. The Wellesley Farms station is listed on the U.S. National Register of Historic Places. MWRTA bus service also runs along Walnut Street, Cedar Street, and Route 9.

For elders and people with disabilities there is a specific MBTA-based service, The Ride, which offers free or low-cost door-to-door service by appointment.

From nearby Riverside MBTA Station in Newton, commuter express buses run to downtown Boston, Newton Corner and Central Square, Waltham. This is also a station for Greyhound Lines and Peter Pan Bus Lines with frequent service to Boston, New York City, and other destinations.

Wellesley's Council on Aging contracts out a daily low-cost minibus service offering elderly access to several local medical facilities and the Woodland MBTA station. Further afield is the Springwell Senior Medical Escort Program / Busy Bee Transportation Service for rides to medical & non-medical services in the area. There is also a monthly minibus to the Natick Mall.

For Amtrak service the nearest stations are west in Framingham, east in Boston at Back Bay and South Station, and south in Route 128 Station in Westwood.

The nearest international airport is Boston Logan Airport at 18 miles from Wellesley.

In February 2009 Wellesley’s Municipal Light Plant introduced the Voluntary Renewable Energy POWER TO CHOOSE program to improve home efficiency and offer a variety of options for the community to lower energy consumption. As a result, many residents, businesses, and the three colleges voluntarily pay a premium to purchase electricity generated by wind power.

In 2014 Wellesley ranked third in the nation for customer participation after Portland, OR and Sacramento, CA.

Also in 2012 the Wellesley Municipal Light Plant was the only green power supplier nationwide to receive the Innovative Green Power Program of the Year Award.

In 2009 the Town established the Municipal Energy Efficiency Committee (MEEC) made up of representatives from various Town departments, to develop and evaluate municipal policies to reduce energy use.

The Committee is responsible for Wellesley’s adoption of the Massachusetts Stretch Building Code approved by Town Meeting effective January 2012.

Wellesley is the longest running Tree City USA community of any city or town in Massachusetts.

The Town's Natural Resource Protection (NRP) Development bylaw, approved by Town Meeting in 2013 applies to any subdivision generating 5 or more lots. This bylaw requires a minimum of 50% of the property be preserved as open space in exchange for reduced lot sizes without increasing density.

In 2001 the Commission in collaboration with the Health, Public Works and School Departments developed a Pesticide Awareness Campaign resulting in an Organic Pest Management Policy governing pesticide use on all town-owned property.

In 2003 the Commission created the Preservation Master Plan for Fuller Brook Park in collaboration with Wellesley’s Department of Public Works. This major restoration project will be completed in 2016.

In 2009 the Commission launched the Green Wellesley Campaign advocating for sustainability by raising awareness and promoting increased environmental action.

Wellesley Green Schools was established in 2006. Their No Idling Campaign received an Excellence in Energy and Environmental Education Award from the state of Massachusetts in 2014.

In 2015 the Wellesley 3R (Reduce/Reuse/Recycle) Working Group was formed to consider possible initiatives to increase recycling and reduce waste in Wellesley. The initiative is a joint-effort of the Department of Public Works, Natural Resources Commission and Sustainable Energy Committee.

Each year the weekend before Memorial Day, The Town of Wellesley sponsors the annual Wellesley's Wonderful Weekend which includes the annual Veterans' Parade and Fireworks. The fireworks display is one of the most elaborate and spectacular shows that is done by local or town government in the United States. It is put on by Atlas Fireworks of Jaffrey, New Hampshire who also put on the Jaffrey Festival of Fireworks. On Sunday, May 18, 2008, The Beach Boys performed in a concert on the Wellesley High School athletic fields in front of an estimated 10,000 town residents and fans. The funds for the performance, an estimated 250 thousand dollars, were made as a gift by an anonymous donor and lifelong fan of the band.

The Wellesley College campus includes greenhouses and the H. H. Hunnewell Arboretum. This is not to be confused with the neighboring private H. H. Hunnewell estate. The Elm Bank Horticulture Center is home to the Massachusetts Horticultural Society. Although the entrance is in Wellesley, access is over a small private bridge over the Charles River, so Elm Bank is therefore in the neighboring town of Dover.

All content from Kiddle encyclopedia articles (including the article images and facts) can be freely used under Attribution-ShareAlike license, unless stated otherwise. Cite this article:
Wellesley, Massachusetts Facts for Kids. Kiddle Encyclopedia.