Southborough is a town in Worcester County, Massachusetts, United States. It incorporates the smaller villages of Cordaville, Fayville, and Southville. Its name is often informally shortened to Southboro, a usage seen on many area signs and maps, though officially rejected by town ordinance. Its population was 9,767 at the 2010 census, in nearly 3,000 households.

Southborough was named Number 31 in the nation on CNN Money's "100 Best Places to Live" in 2009. Southborough consistently ranks #1 as the wealthiest community in Worcester County. It ranked 15th for most million dollar earners among all other Massachusetts communities. Southborough home prices are not only among the most expensive in Massachusetts, but Southborough real estate also consistently ranks among the most expensive in America. 93.80% of the towns residents are employed in white-collar jobs, well above the nation's average.

First settled in 1660, land use now is primarily residential, with substantial open space. A tenth of the town's area is flooded by the Sudbury Reservoir. Light industrial land use is concentrated along main roads, primarily Massachusetts Route 9, and there are several small business districts in the villages and along Route 9. S

Southborough was first settled in 1660 and was officially incorporated in July 1727. Southborough was primarily a farming community until mills began to tap the small rivers that ran through the town. By the end of the 19th century, Southborough was home to the manufacture of plasters, straw bonnets, boots, and shoes, among other things.

In 1898 the Fayville Dam was constructed to produce several reservoirs to supply a growing Boston with water. As a result, manufacturing vanished, and Southborough did not see substantial growth until the high-tech boom of the 1970s.

The Fay, Burnett, and Choate families along with hundreds of others had a major impact on the development of the town as it is known today. Buildings such as St. Mark's Church, St. Mark's School, the Library, and the Community House and the Fay School were all derived from or were direct products of these families.

Southborough is located in eastern Massachusetts, bordered by six towns: 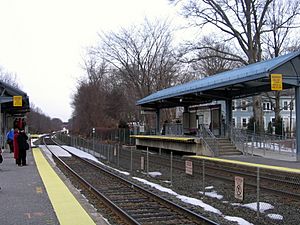 The 7:33 AM Express MBTA Commuter Rail Train about to arrive at Southborough Station on March 7, 2007

The MBTA Commuter Rail's Framingham/Worcester Line train stops at Southborough Station, which opened to commuters on June 22, 2002. The station is located in the Cordaville neighborhood, on Route 85 near the border with Hopkinton. As of October 2007, ten daily round-trip trains provide service to Boston via the Back Bay and South Station terminals.

Some interesting places in Southborough are:

There are also events on the prior Sunday, including a five-mile run, a three-mile walk, and a pumpkin-carving contest that is judged at dusk.

All content from Kiddle encyclopedia articles (including the article images and facts) can be freely used under Attribution-ShareAlike license, unless stated otherwise. Cite this article:
Southborough, Massachusetts Facts for Kids. Kiddle Encyclopedia.