Kids Encyclopedia Facts
This page is about the town. For the census-designated place, see Northborough (CDP), Massachusetts.

Northborough is a town in Worcester County, Massachusetts, United States. The official spelling of the town's name is "Northborough", but the alternative spelling "Northboro" is also used. The population was 15,741 at the 2020 census. 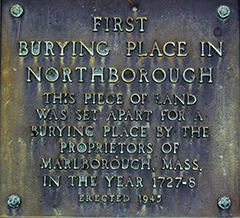 Plaque at the first burial ground on Brigham Street

The areas surrounding Northborough were first settled by Nipmuc Indians. Europeans set up a plantation on May 14, 1656, following a petition for resettlement from the people of the Sudbury Plantation to the General Court of the Bay Colony. On January 24, 1766, the district of Northborough was established within neighboring Westborough. On August 23, 1775, the district became a town, and on June 20, 1807 part of neighboring Marlborough was annexed to Northborough.

The first meeting house was established in 1746, with the legal governor of the town being called the Town Minister. The first Town Minister was Reverend John Martyn. 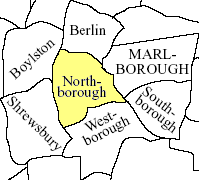 Northborough is located in Central Massachusetts, and shares a border with five towns and one city:

There were 4,906 households, out of which 43.4% had children under the age of 18 living with them, 68.9% were married couples living together, 7.6% had a female householder with no husband present, and 21.2% were non-families. 17.1% of all households were made up of individuals, and 6.2% had someone living alone who was 65 years of age or older. The average household size was 2.83 and the average family size was 3.22.

Northborough has many schools, public and private. It is home to four public elementary schools serving grades Pre-K–5: Lincoln Street School, Marguerite E. Peaslee School, Fannie E. Proctor School, and Marion E. Zeh school. Private schools include The Cornerstone Academy, a private elementary school, and St. Bernadette School, a private Catholic elementary and middle school. In 2002 the Northborough Middle School was renamed after superintendent of schools, Robert E. Melican. All of the public schools in Northborough are part of the Northborough-Southborough School District. The public high school serving Northborough is Algonquin Regional High School, shared with Southborough. The mascot for Northborough-Southborough students is the Tomahawk. Algonquin's main sports rivals are the Westborough Rangers. Debates have erupted over whether Northborough and Southborough should have separate high schools; however, citizens of both Northborough and Southborough successfully fought to keep the school regionalized. Assabet Valley Regional Technical High School is an alternate choice for Northborough students, though the majority of students attend Algonquin. Private high schools in the area include Fay School and St. Mark's School in Southborough, St. John's High School in Shrewsbury, and Bancroft School, Worcester Academy, and Notre Dame Academy in Worcester.

All content from Kiddle encyclopedia articles (including the article images and facts) can be freely used under Attribution-ShareAlike license, unless stated otherwise. Cite this article:
Northborough, Massachusetts Facts for Kids. Kiddle Encyclopedia.