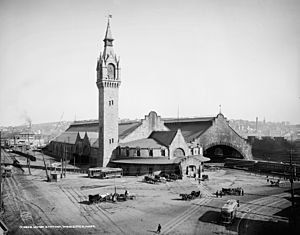 The last pre-Amtrak service, on April 30, 1971, was an unnamed Penn Central successor to the New England States. Passenger service to Union Station lapsed between 1971 and 1975, and the abandoned station fell into disrepair. 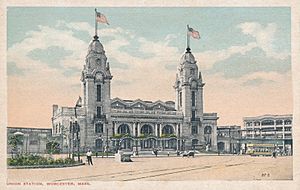 Subsequently, Union Station was acquired by the Worcester Redevelopment Authority and completely renovated at a cost of $32 million. The station was restored and renovated by Finegold Alexader Architects of Boston, and re-opened in July 2000. An intercity and local bus terminal, with five bus ports, was added at a cost of $5.2 million and opened in August 2006.

Union Station's facilities include the Grand Hall, with original elliptical stained-glass ceilings, interior marble columns and mahogany wood trim, Luciano's Cotton Club, a 1920s gangster-themed restaurant, and the Union Station Parking Garage, which has 500 spaces and direct access to the station. The Cannabis Control Commission established their state headquarters in Union Station in 2019.

There are proposals to extend more frequent passenger service west to Springfield.

Union Station is accessible and has a single high-level side platform several cars long. It is the only station on the line (other than the three limited-service Newton stations) that can only be served by one train at a time - all other stations have two side platforms or an island platform. This limits the number of daily trains that can serve Worcester, and causes frequent cascading delays. After years of discussion about adding a second platform and extending the side platform to full length, the MBTA approved a two-year, $4 million design contract in October 2018.

Design reached 30% in August 2019. The 820-foot (250 m)-long island platform will have an accessible footbridge at its east end, and stairs and an elevator into a converted storage room to provide direct access from the station building. A crossover east of the station will also be built. The full length of the new platform will have a canopy. Construction is estimated to cost between $40 and $48 million. As of March 2020[update], construction is expected to last from November 2020 to November 2022 if funding is found. A temporary platform east of the I-290 overpass would be used while the west half of the new platform is constructed; the west half would then be used while the east half is built. In October 2020, $29.3 million in federal funding for the project was announced.

When completed, the new 14,000 square foot facility will house the WRTA's administrative offices and its customer service center. Included in the design are a new bus pavilion with an enclosed public waiting area, restroom facilities, ticket vending machines and eight bus slips.

All content from Kiddle encyclopedia articles (including the article images and facts) can be freely used under Attribution-ShareAlike license, unless stated otherwise. Cite this article:
Union Station (Worcester, Massachusetts) Facts for Kids. Kiddle Encyclopedia.