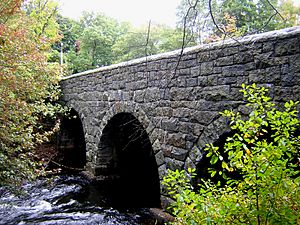 Paul's Bridge, Milton and Boston Massachusetts, crossing the Neponset River, the border between the two.

The Neponset River is a river in eastern Massachusetts in the United States. Its headwaters are at the Neponset Reservoir in Foxborough, near Gillette Stadium. From there, the Neponset meanders generally northeast for about 29 miles (47 km) to its mouth at Dorchester Bay between Quincy and the Dorchester section of Boston, near the painted gas tank.

The Neponset River forms the southern boundary of the city of Boston, passing through the neighborhoods of Readville, Hyde Park, Mattapan and Dorchester, and forms the northern border of the city of Quincy. In addition, the Neponset touches the towns of Foxborough, Walpole, Sharon, Norwood, Canton, Stoughton, Westwood, Dedham, and Milton.

The Neponset River is fed by a drainage basin of approximately 130 square miles, a watershed that includes numerous aquifers, wetlands, streams, and surrounding upland areas. Some 250,000 people live in the Neponset River watershed, which in addition to the towns listed above, includes portions of Stoughton, Medfield, Dover, and Randolph.

The Canton River, a tributary of the Neponset River, is located in Canton, Massachusetts. It flows under the Canton Viaduct.

Before Europeans arrived, the area was inhabited by Algonquian-speaking Native American tribes. The Wamsutta site (19-NF-70) is a paleoindian site, which was dated to 10210 ± 60 BP). Evidence of habitation along the Neponset River also includes the Middle Archaic (ca. 5000 BC) at sites such as Green Hill near the Blue Hills.

The river's recorded history begins in 1619 when Native Americans traveled down the Neponset River to Thompson's Island, where they traded furs with English settlers.

The falling waters of the Neponset provided the energy for the country's first water-powered grist mill, gunpowder mill, paper mill and the Revere Copper Company, among others.

The upper stretch of the Neponset River, in Foxborough, Walpole and Norwood, is steeply sloped, dropping about 228 feet (69 m) over its first 12 miles, (19 km) and so the earliest years of the Industrial Revolution brought the Neponset to prominence. In 1635, Israel Stoughton built the first dam on the Neponset (only the second dam in the entire New World) for his grist mill. It was the first of three mills for flour, gunpowder and paper making.

In 1639, English settlers in Dedham began digging a canal connecting the Charles River with Mother Brook, a tributary of the Neponset, in order to provide their town with water power for mills; it was the first man-made canal in North America and increased the water flow in the lower sections of the Neponset. In 1640, shipbuilding began at Gulliver's Creek Wharf, and in 1673 John Trescott built a lumber mill on the river.

In 1765, a chocolate mill was established by Dr. James Baker and Irish immigrant John Hannon (later known as Walter Baker & Company producing Baker's Chocolate) in the Lower Mills section of Dorchester, and in 1770 Daniel Vose's Wholesale Shipping Warehouses at the second Milton Town Landing at Lower Mills were at the peak of their operation. Ship building and commercial shipping were the major river industries at the estuary. In 1773, George Clark built a paper mill on remnants of Trescott's Lumber Mill, which became the Tileston and Hollingsworth Paper Mill in 1836. In 1826, the river became the terminus of the Granite Railway, the first commercial railway in the United States. This river was central to the establishment of the town of Walpole. The river now flows through the Dorchester-Milton Lower Mills Industrial District.

The stretch of the Neponset from Milton to Dorchester Bay was referred to as Milton River on some early maps.

Today the Neponset River and its watershed are increasingly being protected and opened up as a recreational destination for the benefit of local residents. Several recommendations of the 1966 Lower Neponset River Reservation Master Plan have been implemented, including the reclamation of the former Hallet Street landfill and the old Neponset Drive-In to provide the 66-acre (270,000 m2) Pope John Paul II Park, which opened to the public in 2001. At Squantum Point in Quincy, phase one of Squantum Point Park, 25 acres (100,000 m2) of a 50-acre (200,000 m2) former U.S. Navy Airfield, was developed as waterfront parkland with assistance from National Grid plc and dedicated in the spring of 2001.

The Neponset River figures in the movie Black Mass, referencing an area south and east of the Keystone Shoreline in Dorchester, Massachusetts on the north bank, underneath the area where the Interstate 93 / Southeast Expressway / Route 1 bridge spans the river. A character in the movie makes reference to the area as "Bulger's Burial Ground". That unmarked burial ground really did exist, but in actuality was approximately one mile north of the area referenced in the film, near Tenean Beach in the Dorchester Shores Reservation.

2.4 miles (3.9 km) of the Lower Neponset River Trail opened in 2003. The trail follows the former right-of-way of the Dorchester and Milton Branch Railroad, the western part of which is also used by the MBTA Ashmont–Mattapan High Speed Line.

All content from Kiddle encyclopedia articles (including the article images and facts) can be freely used under Attribution-ShareAlike license, unless stated otherwise. Cite this article:
Neponset River Facts for Kids. Kiddle Encyclopedia.