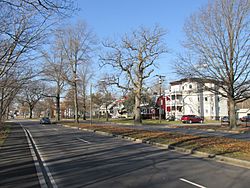 Readville is part of the Hyde Park neighborhood of Boston. Readville's zip code is 02137. It was called Dedham Low Plains from 1655 until renaming in 1847 after Mr. James Read. It was part of Dedham until 1867. It is served by Readville station on the MBTA Commuter Rail. It is on the original alignment of Route 128, later part of a since-discontinued section of Route 135. Readville is bordered by the Town of Milton to the south and Town of Dedham to the west. Paul's Bridge, which is at the neighborhood's entrance as one approaches from Milton, is one of the oldest bridges in the Commonwealth. The name comes from James Read, a resident and cotton mill owner. Readville is covered by Boston Police Department District E-18 in Hyde Park and a fire station on Neponset Valley Parkway houses Boston Engine Company 49. Readville is also home to several light industries.

Readville was home to Camp Meigs during the American Civil War, a training camp for Union soldiers, including those of the famed 54th Massachusetts Infantry, portrayed in the film Glory. Another unusual regiment that trained at Camp Meigs was the 2nd Massachusetts Cavalry, half of which was recruited in California and sent via ocean transports to Readville for training before being sent to Virginia to the war. There are plaques and small monuments commemorating this history at what is now called Meigs Field. The annual Field Day picnic is held at Meigs Field every July 4.

The neighborhood was an Irish and Italian stronghold through much of the 20th century but is now home to many African-American and Hispanic and Latino residents.

The Blue Hill Community Church is a non-denominational church founded in 1888. At BHCC, Phillips Brooks preached his last sermon and his Christmas Carol "O Little Town of Bethlehem" had its first performance. Samuel Francis Smith first read his poem "America" at BHCC; it was later set to music and became known as "My Country Tis of Thee." St. Anne's Roman Catholic Church serves as the local parish. Former Boston Mayor Thomas Menino and Massachusetts State Representative Angelo Scaccia are both longtime Readville residents.

In the early part of the 20th century, a prominent harness racing facility called Readville Trotting Park was located in the neighborhood. That property later became a Stop & Shop warehouse and distribution center and is now a multi-use warehouse property. Readville has excellent views of Great Blue Hill and the Blue Hills Reservation and has a wetlands area known as Fowl Meadow. The Neponset River is another natural feature.

Readville was also home to the massive New York, New Haven & Hartford Railroad Locomotive and Car Shops, which closed in 1960. Today, the CSX Railroad operates a portion of the Readville Freight Yard along Prescott Street and the MBTA Commuter Rail has a passenger car facility for light maintenance and servicing just outside Wolcott Square. Amtrak's Northeast Corridor runs through Readville on trackage shared with MBTA Commuter operations and CSX freight operations.

All content from Kiddle encyclopedia articles (including the article images and facts) can be freely used under Attribution-ShareAlike license, unless stated otherwise. Cite this article:
Readville, Boston Facts for Kids. Kiddle Encyclopedia.