Canton is a town in Norfolk County, Massachusetts, United States. The population was 21,561 at the 2010 census. Canton is part of Greater Boston, about 15 miles (24 kilometers) southwest of downtown Boston.

Canton was officially incorporated on February 23, 1797 from the town of Stoughton, Massachusetts. The name "Canton" was suggested by Elijah Dunbar and comes from the early belief that Canton, China was on the complete opposite side of the earth (antipodal). In addition to being a prominent Canton citizen, Elijah Dunbar was the first president of the Stoughton Musical Society from 1786 to 1808. Now named the Old Stoughton Music Society, it is the oldest choral society in the United States.

Paul Revere built the nation's first copper rolling mill in Canton in 1801. His poem entitled Canton Dale expresses his affection for the town. Canton was the location of the Rising Sun Stove Polish Company, founded by Elijah Morse, a wealthy merchant and creator of the pot-belly stove.

Canton lies at the foot of Great Blue Hill. The Canton River flows through the center of the town, linking a chain of small lakes including Bolivar and Forge Ponds and flowing into the Neponset River. The Neponset River forms the boundary between Canton and its western neighbors: Norwood, Westwood, and Dedham. In addition to wooded land, the area includes wetlands, particularly in the eastern part along Route 138 near the Randolph and Stoughton borders, and in the western part along I-95.

Canton borders the towns of Dedham, Milton, Norwood, Randolph, Sharon, Stoughton, Westwood and the Hyde Park neighborhood in the city of Boston.

There were 7,952 households out of which 30.9% had children under the age of 18 living with them, 58.4% were married couples living together, 8.9% had a female householder with no husband present, and 30.2% were non-families. 25.4% of all households were made up of individuals and 12.3% had someone living alone who was 65 years of age or older. The average household size was 2.56 and the average family size was 3.12.

Interstates 93, 95, and Massachusetts Route 128 diverge in Canton. I-93 goes east, then north into Boston, from which it continues north into New Hampshire. I-95 is locally a beltway that skirts Boston to the west, continues circling Boston until it is north of the city, then goes north through New Hampshire and ends in Maine. South of Canton, it leads to Providence, Rhode Island, Connecticut, New York City, Washington, D.C. and ultimately to Miami, Florida.

Route 138 has a cloverleaf interchange with Route 93 in Canton near Great Blue Hill. From Canton, it goes north into Milton, then enters Boston in the Mattapan section. South of Canton, it travels to Stoughton, continuing into Rhode Island, through Newport and ending in southwest RI.

Route 24 is a divided, limited-access highway that originates at Route 93 in Randolph, just east of Canton. From there, it goes south through the easternmost corner of Canton, running roughly parallel to Route 138 as far as Portsmouth, Rhode Island.

MBTA commuter rail trains on the Providence/Stoughton Line pass through Canton. Some stop at Canton Junction. This line crosses the Neponset River on the Canton Viaduct, a prominent local landmark. Route 128 Station in neighboring Westwood also carries many Canton commuters into Boston. Amtrak trains (including the Acela Express high-speed trains) also stop at Route 128, but pass through Canton without stopping. Of note, on March 25, 2008 a runaway box car crashed into a MBTA train at Canton Junction station injuring 150 people on board.

Another line branches into Stoughton, stopping at Canton Center.

Bus service is available to Mattapan Station in the MBTA system.

Although Canton once had an airfield, since 1970 it no longer does. Norwood Memorial Airport is the closest airport to Canton. For scheduled air service, residents go to Boston's Logan International Airport or to T. F. Green Airport in Rhode Island. 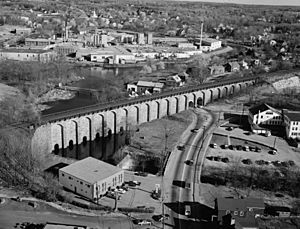 A west side view of the Canton Viaduct looking south with the former Revere Copper Mill in the background, April 1977.

All content from Kiddle encyclopedia articles (including the article images and facts) can be freely used under Attribution-ShareAlike license, unless stated otherwise. Cite this article:
Canton, Massachusetts Facts for Kids. Kiddle Encyclopedia.