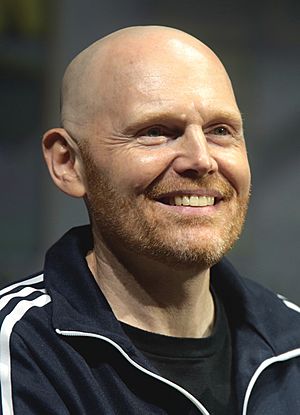 William Frederic "Bill" Burr (born June 10, 1968) is an American comedian, writer and actor. He is the host of the Monday Morning Podcast, and appeared in the AMC crime-drama show Breaking Bad. In 2013, The New York Times wrote that Burr "has been one of the funniest, most distinctive voices in the country for years. He has released six stand-up specials.

Burr was born in Canton, Massachusetts. His parents are of German and Irish ancestry. His father worked as a dentist. He married producer, director and screenwriter Nia Hill in 2013. Their daughter was born in 2017. As of May 2015, Burr is a licensed helicopter pilot and he has played the drums for a long time.

Rolling Stone magazine called Burr "the undisputed heavyweight champ of rage-fueled humor." Burr often makes himself look like "that loud guy in the bar" with "uninformed logic." In an interview with the The Boston Globe, Burr stated, "I'm the 'dude, bro' guy." He has also been known to not care about being politically correct."

All content from Kiddle encyclopedia articles (including the article images and facts) can be freely used under Attribution-ShareAlike license, unless stated otherwise. Cite this article:
Bill Burr Facts for Kids. Kiddle Encyclopedia.