Kids Encyclopedia Facts
Not to be confused with Matapan. 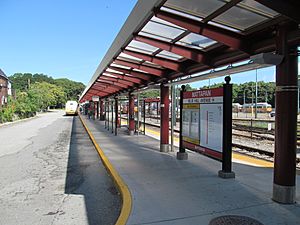 Mattapan (/mætəˈpæn/) is a neighborhood in Boston, Massachusetts. Historically a section of neighboring Dorchester, Mattapan became a part of Boston when Dorchester was annexed in 1870. As of the 2010 census, it had a population of 36,480, with the majority of its population immigrants. Like other neighborhoods of the late 19th and early 20th century, Mattapan developed, residentially and commercially, as the railroads and streetcars made downtown Boston increasingly accessible. Predominantly residential, Mattapan is a mix of public housing, small apartment buildings, single-family houses, and two- and three-family houses (known locally as "Three-Deckers" or "Triple-Deckers"). Blue Hill Avenue and Mattapan Square, where Blue Hill Avenue, River Street, and Cummins Highway meet, are the commercial heart of the neighborhood, home to banks, law offices, restaurants, and retail shops. The new Mattapan Branch of the Boston Public library opened 2009, at a cost of more than $4 million. Mattapan has a large portion of green space within the neighborhood. The Harambee Park, the Franklin Park Zoo, the Boston Nature Center and Wildlife Sanctuary, Clark-Cooper Community Gardens, and historic Forest Hill Cemetery can all be considered green space within the neighborhood of Mattapan. Mattapan's demographics are diverse, with a large population of Haitians, Caribbean immigrants, and African Americans. Mattapan has public services such as a recently renovated community health center, and constable services. Mattapan has a trolley running through it, which is accessible via Ashmont.

Mattapan is claimed as the original Native American name for the Dorchester area, though accounts vary whether the phrase meant "a good place to be," or "a good place to sit" or "an evil, spread about place."

Dorchester was settled by English settlers in 1630. Mattapan was originally a part of Dorchester until the nineteenth century, when it was annexed onto its own neighborhood. The Neponsett Tribe originally settled Mattapan, which was a tribe of the Massachusetts confederation of Native Americans. The name Mattapan originated with this Native American tribe and it is defined as "a good place to be" or "a good place to sit". At the turn of the 20th century, the population of Mattapan was largely Caucasian, but starting in the late 1960s, blockbusting intentionally designed to destabilize the neighborhood drove many long-term residents out of Mattapan. In the 1980s, a significant number of Haitians immigrated to Mattapan, leading to the current demographic population. Mattapan has become an important center for the Haitian cultural, social, and political life in the state of Massachusetts. As of 2015, Mattapan also has a large population of African Americans, Jamaicans, and other Caribbean immigrants. 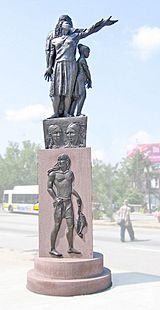 "Rise," a pair of statues installed in 2005, flank Blue Hill Avenue in Mattapan and define it as a gateway to Boston. This statue is by Fern Cunningham. 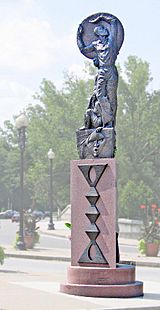 "Rise;" this member of the pair is by Karen Eutemy.

The period from 1968 to 1970 made up the most dramatic period of ethnic transition in Boston. Hillel Levine and Lawrence Harmon, in their 1991 book The Death of an American Jewish Community, argue that redlining, blockbusting, and fear in neighborhood residents created by real estate agents brought about panic selling and white flight. The banking consortium Boston Banks Urban Renewal Group (B-BURG) allegedly drove the Jewish community out of Mattapan and are held partially responsible for the ensuing deterioration of the neighborhood, especially along the Blue Hill Avenue corridor. According to Levine and Harmon, the reason behind this orchestrated attack on the community was to lower market values to buy property, sell the housing with federally guaranteed loans at inflated prices to black families who could not afford it, and to get the white community to buy property owned by the banks in the suburbs. Gerald Gamm Despite these allegations in his 1999 book Urban Exodus, arguing that differences between the Jewish and Catholic communities in Boston constituted the greater contributing factor. As the Jewish people moved out of Mattapan the Caribbean American and the African Americans began to move in.

In Mattapan the population was 36,299 in 2013. Of this total, 8.5% were Caucasian, 81% African American, 1% Asian, 2% mixed race and 6.5% other races.[1] According to the Boston Redevelopment Authority, 67.3% of households are family based rather than single men and women or couples. It was also noted that Mattapan has among the highest percentage of people who speak French in their homes.[2] Based on percentages in Mattapan, the cost of living is 8% lower than Boston, the total crime rate is 27% higher compared to Boston, the amount of high school graduates are 11% lower than Boston, employment is 9% lower, and housing is 23% lower than Boston.[1] The majority of homes in Mattapan are triple decker apartment buildings.

Today Mattapan is seeing another major population shift, albeit a natural turn over of housing, as a large number of immigrants from Haiti and other Caribbean countries continue to move in. Mattapan now has the largest Haitian community in Massachusetts, and is also largely made up of African Americans and immigrants from other Caribbean countries. In 2013 the population in Mattapan was 36,299. Of this total 8.5% were Caucasian, 81% were African American, 1% were Asian, 2% were a mixed race, and 6.5% were devoted to other races. According to the Boston Redevelopment Authority 72.4% of the population living in Mattapan were born in Massachusetts, 23.6% were born outside of the states, and 3.2% were born outside of the United States. Of those born outside of the United States 33.2% were born in Haiti and 17.2% were born in Jamaica. For the total adult population, 38.9% graduated from High School, while only 14.7% have a bachelor's degree. The median household income in Mattapan is $44,744. There is an average of 12,345 people per square mile. 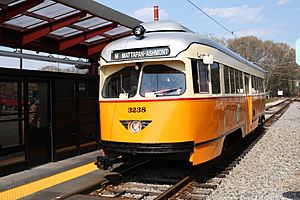 The Mattapan-Ashmont trolley line of the MBTA serves Mattapan as well as several bus routes. In the beginning of 2016, the Mattapan trolley was in danger of being derailed and being transformed into bus routes instead; which would be more cost effective than keeping the trolley as rail line., However, Boston officials have fought to cancel this transformation because although this would be more cost effective, property values would decrease and would "most importantly, torpedo a mixed-use, mixed-income residential-retail project slated for the Mattapan station parking lot". At this point in time, the project to convert the Trolley into buses will not be carried out.

The Fairmount Line of the MBTA Commuter Rail also serves Mattapan at Morton Street, providing service to downtown Boston and the suburbs. The Fairmount Corridor Commuter Rail Line currently runs from South Station south through the Boston neighborhoods of Dorchester, Roxbury, Mattapan and terminates in Readville section of Hyde Park. It consists of approximately 9.2 miles of track, four stations (Uphams Corner, Morton Street, Fairmount, and Readville) and forty-one bridges. It is the only Commuter Rail Branch that exclusively serves the City of Boston and MBTA’s Urban Core.[12]

Mattapan United is a community organizing process that connects residents and other leaders to define the future of Mattapan. This resident-led process, convened by ABCD Mattapan Family Service Center, resulted in a community contract that identifies strengths and challenges, and outlines solutions. Mattapan United along with the ABCD Foundation also created 'Mattapan Square Main Streets' promoting Mattapan Square as a culturally and economically rich commercial district in collaboration with residents and.

They offer helps with regards to job opportunities, tax, summer works, computer labs and workshops, education classes for seniors etc. Its mission statement, " is to empower disadvantaged people by providing them with tools to overcome poverty, live with dignity, and achieve their full potential".[6] Also online website like MyMattapan.org and Mattapan United are one stop to know anything about its community. Mattapan United is,"a comprehensive community development initiative that aims at improving the quality of life for people who live and work in Mattapan".[7] It offers resources and serves as platform for people and its organizations, groups, and civic leader to engage and discuss. These are led by their residents which reflects their core community values and adhere to its vision to serve the community.Mattapan Food and Fitness Coalition founded in 2006 is an organization primarily formed to provide its residents of healthy living and eating and space options. It initiates to serve its diverse community on its path to better health. Haitian - American Health Public Health Initiatives, a NGO formed in 1989 with deep interest to serve its Haitian population. But today it has also extended it services to Haitians living in greater Boston area through its comprehensive programs and initiatives.[8] 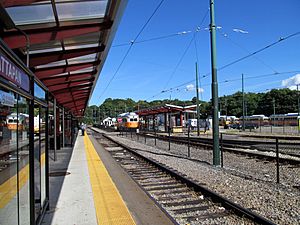 "The population in Mattapan during the 1960's rose from 500 to over 19,000 in one decade. This was followed by an influx of thousands of Haitians in the 1970s. By 1999, The Boston Globe reported that there were between 70,000 and 120,000 Haitians living in Mattapan, making it one of the largest Haitian communities in Massachusetts." Nowadays Mattapan is still a very popular place to live. Mostly people of color migrate here because of racial segregation, for example, stated in the article, over 90% of the population is made up of people of color, 84% being Black, 7% Latino, 3% White, and 1% Asian. [4] Per capita income in Mattapan for a typical neighborhood is just $14,800.[4]

According to this article, [4] Black and Latino residents in the Mattapan area experience higher levels of chronic disease, mortality, and poorer health than the White residents living in Mattapan.

Urban Renewal has played a great deal in the neighborhood of Mattapan. Then Boston Mayor Thomas Menino put these projects into place in 2006. After increased business and capital investment in commercial areas along with peoples properties, Mattapan became more popular and more of an increasing area that people moved to.[5]

In 2006, Mayor Thomas Menino implemented the Mattapan Economic Development Initiative. Mayor Menino created "MEDI" (Mattapan Economic Development Initiative) so that there was a specific plan and framework to grow the economy and the quality of life within the Mattapan community. The three main goals of the "MEDI" are to "1. Improve the business districts of Mattapan Square, Blue Hill Avenue Center, and the Morton Village Corridor. 2. Create job opportunities within the neighborhood. 3. Increase capital investment in commercial areas and properties." The Boston Redevelopment Authority was in charge of ensuring that these goals would be met. Mayor Menino backed this redevelopment plan with $250,000 to ensure that small business growth occurred. Mayor Menino also funded and allowed for a Community Implementation Team to be put in place to work with the Mattapan Economic Development Initiative to work with the zoning laws and issues within the neighborhood of Mattapan. Some major issues being addressed with zoning in Mattapan is to increase the building heights and density of the buildings in the business districts. Another major issue that the Community Implementation Team is looking at with zoning is how to better make the neighborhood a welcoming and healthy environment to reside in. According to the Boston Redevelopment Authority, "Commutatively, the zoning recommendations have the minimum potential to add 100,000 square feet of commercial space, 500 jobs, 700 housing units, and bring an additional $11 million in purchasing power to Mattapan."

All content from Kiddle encyclopedia articles (including the article images and facts) can be freely used under Attribution-ShareAlike license, unless stated otherwise. Cite this article:
Mattapan Facts for Kids. Kiddle Encyclopedia.