Orford is a town in Grafton County, New Hampshire, United States. The population was 1,237 at the 2020 census, unchanged from the 2010 census. The Appalachian Trail crosses in the east. 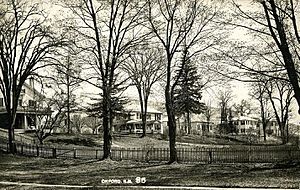 First called Number Seven in a line of Connecticut River fort towns, Orford was incorporated in 1761 by Governor Benning Wentworth and named for Robert Walpole, Earl of Orford, who was England's first prime minister. It was settled in 1765 by Daniel Cross and wife from Lebanon, Connecticut. By 1859, it had 1,406 inhabitants, most involved in agriculture. There was a large tannery, chair factory, 10 sawmills, a starch factory, a gristmill, a sash, blind and door factory, and 2 boot and shoe factories.

An original grantee was General Israel Morey, whose son Samuel Morey discovered a way to separate hydrogen from oxygen in water, making possible the first marine steam engine. He recognized the potential of steam power after working at his father's ferry. In 1793, on the river at Orford, he was first to demonstrate the use of a paddlewheel to propel a steam boat.

Author Washington Irving visited Orford in 1832 and is quoted as saying, "In all my travels in this country and in Europe, I have seen no village more beautiful than this. It is a charming place -- nature has done her utmost here." Of the famous sequence of seven early homes built on The Ridge, Dartmouth Professor of Architecture Hugh Morrison said, "As a row and counting the setting, this is the finest group of Federal-style houses in the United States." Built between 1773 and 1839, the dwellings show the influence of architect Asher Benjamin.

According to the United States Census Bureau, the town has a total area of 48.0 square miles (124.3 km2), of which 46.7 sq mi (121.0 km2) is land and 1.3 sq mi (3.4 km2) is water, comprising 2.81% of the town. The Connecticut River, which serves as the boundary between New Hampshire and Vermont, forms the western edge of the town. Most of Orford is drained by Jacob's Brook and other small tributaries of the Connecticut. The northeastern corner of the town, around Upper and Lower Baker Ponds, drains via the Baker River and Pemigewasset River into the Merrimack River.

The highest point in Orford is the summit of Mount Cube, at 2,909 feet (887 m) above sea level, in the eastern part of town. The northern slopes of Smarts Mountain, whose 3,240-foot (990 m) summit lies in the neighboring town of Lyme, occupy the southeast corner of town.

Camps Merriwood and Moosilauke are situated on Upper Baker Pond in Orford. 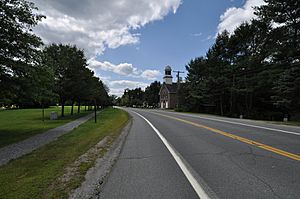 There were 470 households, out of which 26.6% had children under the age of 18 living with them, 55.5% were married couples living together, 7.0% had a female householder with no husband present, and 34.3% were non-families. 27.4% of all households were made up of individuals, and 9.1% had someone living alone who was 65 years of age or older. The average household size was 2.32 and the average family size was 2.84. 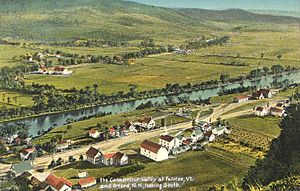 All content from Kiddle encyclopedia articles (including the article images and facts) can be freely used under Attribution-ShareAlike license, unless stated otherwise. Cite this article:
Orford, New Hampshire Facts for Kids. Kiddle Encyclopedia.