Kids Encyclopedia Facts
Not to be confused with Lyman, New Hampshire.

Lyme is a town along the Connecticut River in Grafton County, New Hampshire, United States. The population was 1,745 as of the 2020 census. Lyme is home to the Chaffee Natural Conservation Area. The Dartmouth Skiway is in the eastern part of town, near the village of Lyme Center. The Appalachian Trail passes through the town's heavily wooded eastern end. 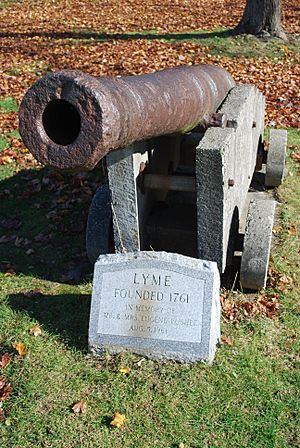 Cannon on the Lyme town green 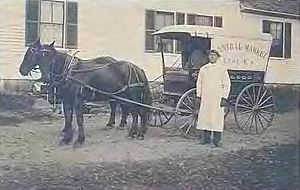 This was once a home to Abenaki Indians, including a band of Sokokis near Post Pond at a place they called Ordanakis. Later, it would be another of many towns granted by Colonial Governor Benning Wentworth along the Connecticut River in 1761. Many of the 63 grantees lived in Massachusetts and Connecticut, but virtually none of them ever settled in Lyme; they sold or assigned their grants to others. However, those settlers who did arrive in 1764 were mostly from those states. In the late 1770s, the town petitioned (ultimately unsuccessfully) to join Vermont.

The scenic town common is surrounded with houses and public buildings dating from the late 1700s to the early 1900s. Stagecoaches traveling the old "Boston Turnpike" from Montreal in the 1830s passed through Lyme, stopping at the Lyme Inn (recently renovated), built in 1809. Next door to the inn is the 200-year-old Congregational Church. Its original 1815 steeple bell was cast by Paul Revere. It was later replaced with a bell cast by Henry N. Cooper & Co., Boston. A hand-wound clock mechanism from E. Howard & Co. strikes the hour. Behind the church is a row of horse sheds dating from 1810 - the longest surviving row of horse sheds in New England. Originally each shed had the name of the owner on a sign above the door. The signs are still there, though not necessarily over the original shed.

The Lyme Common occupies the center of the village of Lyme, located about 1.5 miles (2.4 km) east of the Connecticut River.

Lyme is a rural town. Most human development is in the western half of the town along the Connecticut River and New Hampshire Route 10, known as the Dartmouth College Highway. The eastern half of the town is mostly forest. The town is home to four great ponds: Post Pond, Pout Pond, Trout Pond, and Reservoir Pond. Holts Ledge is a cliff that faces east and is part of the Dartmouth Skiway. The edge of the cliff is fenced to protect falcons. The highest point in town is the summit of Smarts Mountain, at 3,238 feet (987 m) above sea level. The Appalachian Trail crosses the summits of Holts Ledge and Smarts Mountain. 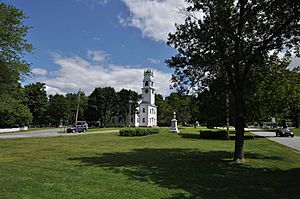 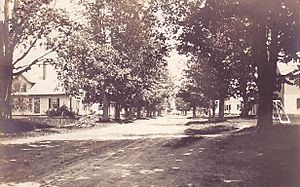 Of the 705 households, 28.5% had children under the age of 18 living with them, 61.3% were headed by married couples living together, 6.5% had a female householder with no husband present, and 28.7% were non-families. 23.5% of all households were made up of householders living alone, and 9.0% were someone living alone who was 65 years of age or older. The average household size was 2.42, and the average family size was 2.86.

Looking at the occupations of employed people in the town over the age of 16, the largest group - 50.9% - is education and health care. The next largest group - 9.6% - is professional, scientific, and management. Construction and manufacturing make up 8.4%; agriculture and forestry make up 0.7%.

Lyme has two K–8 schools, one public and one independent.

There are currently around 200 students attending the Lyme School, the public K–8 school. As of 2018 the Lyme School has full day kindergarten. The school typically ranks in the top 5–10% of New Hampshire schools. Once a pupil reaches ninth grade, students from Lyme attend one of several high schools: Thetford Academy in Thetford, Vermont (across the Connecticut River), Hanover High School in Hanover, New Hampshire (about 10 miles south of Lyme), Hartford High School in Hartford, Vermont, Lebanon High School in Lebanon, New Hampshire, or St. Johnsbury Academy in St. Johnsbury, Vermont. Attendance is typically split between St. Johnsbury Academy, Thetford Academy and Hanover High, with the few remaining students going elsewhere.

Crossroads Academy, founded in 1991 as a K–8 school in Hanover, is now located on a wooded 140-acre (57 ha) campus at 95 Dartmouth College Highway in Lyme. It serves more than 140 students from a 50-mile radius in grades K–8 and employs 39 faculty and staff.

All content from Kiddle encyclopedia articles (including the article images and facts) can be freely used under Attribution-ShareAlike license, unless stated otherwise. Cite this article:
Lyme, New Hampshire Facts for Kids. Kiddle Encyclopedia.