Thetford is a town in Orange County, Vermont, United States in the Connecticut River Valley. The population was 2,617 at the 2000 census. Villages within the town include East Thetford, North Thetford, Thetford Hill, Thetford Center, Rices Mills, Union Village, and Post Mills. The town office is in Thetford Center. . 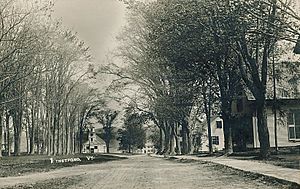 The town was created on August 12, 1761 by way of a royal charter which King George III of England issued to Governor Benning Wentworth of New Hampshire. Wentworth named it for Augustus Henry Fitzroy, 3rd Duke of Grafton, 4th Earl of Arlington and 4th Viscount Thetford, who in 1768 became prime minister. It was first settled in 1764 by John Chamberlin, who lived at East Thetford beside the Connecticut River. He was an agent for one of 62 proprietors (51 from Hebron, Connecticut).

In 1910, the Camp Fire Girls were founded locally. This became a national organization within two years.

Gove Hill Retreat, a nonprofit Christian Retreat center, was founded in 1966 in Thetford Center. The center supplied hospitality to religious, educational and other non-profit organizations. The retreat was sited on property originally owned by John Gove, the first farmer and name sake of Gove Hill.

There were 1,032 households out of which 36.8% had children under the age of 18 living with them, 59.4% were married couples living together, 7.1% had a female householder with no husband present, and 29.2% were non-families. 23.2% of all households were made up of individuals and 6.6% had someone living alone who was 65 years of age or older. The average household size was 2.54 and the average family size was 3.00.

There are two libraries: the main one in Thetford Hill, and a branch in Post Mills.

The Thetford Historical Society is in the same building as the main library. Additional historical material is located in a barn nearby, which is open once a year.

All content from Kiddle encyclopedia articles (including the article images and facts) can be freely used under Attribution-ShareAlike license, unless stated otherwise. Cite this article:
Thetford, Vermont Facts for Kids. Kiddle Encyclopedia.