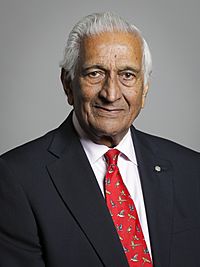 Sir Narendra Babubhai Patel, Baron Patel, KT, FMedSci, FRSE (born 11 May 1938) is a British obstetrician and cross bench peer. From 2006 to 2017, he was the Chancellor of University of Dundee. He was born in Lindi, Tanganyika Territory.

Patel became a Member of the Royal College of Obstetricians and Gynaecologists in 1969, and a Fellow in 1988. He was elected a Fellow of the Royal Society of Edinburgh in 1999.

Patel received a knighthood in the 1997 Queen's Birthday Honours, and was created a life peer on 1 March 1999, as Baron Patel, of Dunkeld in Perth and Kinross.

All content from Kiddle encyclopedia articles (including the article images and facts) can be freely used under Attribution-ShareAlike license, unless stated otherwise. Cite this article:
Narendra Patel, Baron Patel Facts for Kids. Kiddle Encyclopedia.