James Peter Hymers Mackay, Baron Mackay of Clashfern (born 2 July 1927) is a British advocate. He served as Dean of the Faculty of Advocates, Lord Advocate, and Lord Chancellor (1987–1997). He is an active member of the House of Lords where he sits as a Conservative. 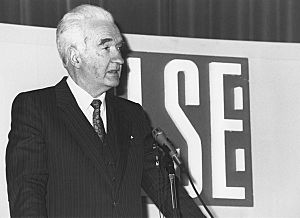 Mackay was elected to the Faculty of Advocates in 1955. He was appointed a Queen's Counsel in 1965 and was Sheriff Principal for Renfrew and Argyll from 1972 to 1974. In 1973 he became Vice-Dean of the Faculty on Advocates and also served as its Dean, the leader of the Scots bar.

In 1979, Mackay was appointed Lord Advocate, the senior law officer in Scotland. Since his retirement, Mackay has sat in the House of Lords. He is the Editor-in-Chief of Halsbury's Laws of England, the major legal work which states the law of England, first published in 1907.

Mackay was appointed a Knight of the Thistle by the Queen Elizabeth II on 27 November 1997. In 2007 the Queen appointed Lord Mackay to the office of Lord Clerk Register. Mackay became a Fellow of The Royal Society of Edinburgh in 1984. In 1989, Mackay was elected Honorary Fellow of Trinity College, Cambridge. Mackay also received an Honorary Doctorate from Heriot-Watt University in 1990. In 1994, he was awarded an Honorary Degree (Doctor of Laws) by the University of Bath.

All content from Kiddle encyclopedia articles (including the article images and facts) can be freely used under Attribution-ShareAlike license, unless stated otherwise. Cite this article:
James Mackay, Baron Mackay of Clashfern Facts for Kids. Kiddle Encyclopedia.