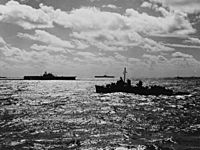 A fleet is normally commanded by an Admiral. Usually his rank is Admiral of the Fleet. Some fleets have been or are commanded by Vice-Admirals or even Rear-Admirals. Most fleets are divided into several squadrons. Each squadron is commanded by a subordinate admiral. Those squadrons in turn are often divided into divisions. In the age of sail, fleets were divided into van, centre and rear squadrons. These were named after each squadron’s place in the line of battle. In more modern times, the squadrons are typically composed of groups of the same class of warships. Examples would be frigates or destroyers.

Since many smaller navies only contain a single fleet, the term the fleet usually means the navy.

All content from Kiddle encyclopedia articles (including the article images and facts) can be freely used under Attribution-ShareAlike license, unless stated otherwise. Cite this article:
Naval fleet Facts for Kids. Kiddle Encyclopedia.