Fifth Harmony is an American girl group formed on the US version of The X Factor in 2012. The members are Ally Brooke, Dinah Jane, Lauren Jauregui, Normani, and Camila Cabello. Cabello left the group in December 2016, while the remaining members announced that they were taking a break in 2018 to go after their own career. 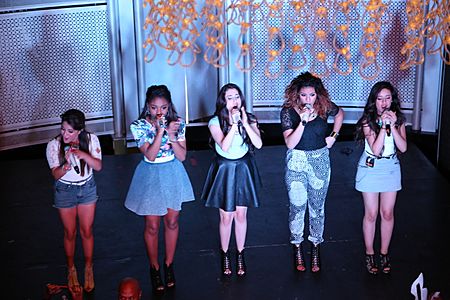 Ally Brooke, Dinah Jane, Lauren Jauregui, Normani, and Camila Cabello auditioned on the second season of the US version of The X Factor on July 27, 2012, failing to make it past the "Teens" and "Young Adults" categories. They were eventually brought back by the judges, and became a five person girl group on July 7, 2012. They eventually came third on the show on December 20, 2012, losing to second-place winner Carly Rose Sonenclar, and winner Tate Stevens.

On January 17, 2013, The X Factor creator Simon Cowell signed them to his record label, Syco Music, along with Epic Records. The group performed covers of famous songs on YouTube, before releasing their extended play, Better Together on October 22, 2013. They performed on stadium tours for Cher Lloyd and Demi Lovato, as well as performing at smaller concerts. They also began recording songs for their first studio album in 2014, which would eventually be known as Reflection.

Reflection was released on February 3, 2015, where it sold 80,000 copies in the first week and reached number five on the Billboard 200 chart. The third single on the album, "Worth It" was the album's most successful song, peaking at number twelve on the Billboard Hot 100.

On December 18, 2016, Cabello announced that she would be leaving Fifth Harmony, which was confirmed by the group in a statement. The four members decided to still perform together.

On May 29, 2017, the group released "Down" as the first song from their self-titled third album Fifth Harmony. The album was released on August 25, 2017, and peaked at number four on the Billboard 200. After touring, the group announced that each member wanted to separate and work on their own projects, causing them to go on a break for an unknown time period.

- Data expected for command 'LineData', but line is not indented.

All content from Kiddle encyclopedia articles (including the article images and facts) can be freely used under Attribution-ShareAlike license, unless stated otherwise. Cite this article:
Fifth Harmony Facts for Kids. Kiddle Encyclopedia.