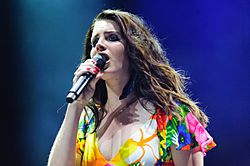 Elizabeth Woolridge Grant (born June 21, 1985), known by her stage name Lana Del Rey, is an American singer and songwriter from New York. She has sold about 19.1 million albums and 13 million singles around the world. She has released six albums and four EPs since 2008. She released her first EP "Kill Kill" as Lizzy Grant in 2008. Two years later, she released her first studio album, titled Lana Del Ray, by 5 Points Records. However, the album was pulled three months after its release. She released her first single as Lana Del Rey, "Video Games", in August 2011. It reached number one in the singles charts in Finland, Denmark,Germany, Japan, Slovakia, Scotland, and Luxembourg. Her second album Born to Die reached number 1 in the UK Albums Chart when it was released on January 27, 2012. Born to Die was reissued on November 9, 2012 as Born to Die: The Paradise Edition, which featured eight new songs. The new songs were featured in the separate EP, Paradise. In 2013 "Young and Beautiful" was on the soundtrack to The Great Gatsby. Her third studio album, Ultraviolence, was released in 2014. A short film, Tropico, was released on the website VEVO on December 5. It has songs from her Paradise EP in it. She has also modelled for H&M.

Her fourth studio album, Honeymoon, was released on September 18, 2015.

The fifth studio album of Del Rey, Lust for Life, was released on July 21, 2017. Four singles were previously released, being "Love", title track "Lust for Life" with The Weeknd, "Summer Bummer" with ASAP Rocky and Playboi Carti, and "Groupie Love", also with ASAP Rocky.

Del Rey's sixth studio album was released on August 30, 2019. The album was well-received by critics.

Del Rey was born in New York City. Lana began singing in her Church choir at a young age, where she was the cantor. She was raised Catholic. When she was fifteen she was sent to Kent School, a boarding school in Connecticut, to deal with her alcoholism. When she was 18 she moved to Bronx to study metaphysics at Fordham University.

All content from Kiddle encyclopedia articles (including the article images and facts) can be freely used under Attribution-ShareAlike license, unless stated otherwise. Cite this article:
Lana Del Rey Facts for Kids. Kiddle Encyclopedia.