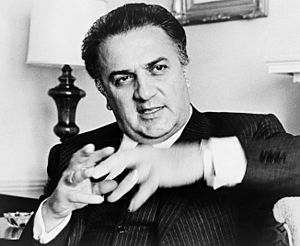 The first movie Fellini directed was Lo Sceicco Bianco (1951), with Alberto Sordi, written by Michelangelo Antonioni and Ennio Flaiano. In making this movie Fellini met Nino Rota, the musician that would follow him for the successful rest of his career.

Fellini was married to actress Giulietta Masina (1921-1994) from 1943 until his death. In 1945, he had a son who survived for only 2 weeks; it was the only child of Fellini and Giulietta Masina. Masina acted in many of his movies. Other actors Fellini often worked with include Marcello Mastroianni, Alberto Sordi, and Anita Ekberg.

During Fascism an Avanguardista, his first writings were for Alleanza Cinematografica Italiana (ACI), a production company of Vittorio Mussolini, son of Benito, who introduced him to Rossellini.

In 1944, when Fascism was over, he opened a shop in Rome in which he sold these drawings. The shop was named (in English) "The Funny Face Shop", and contained works from Fellini and De Seta, Verdini, Camerini, Scarpelli, Majorana, Guasta, Giobbe, Attalo, Migneco (all writers, directors or otherwise intellectuals working for Italian cinema). In the same year started his contribution to Rossellini's Roma Città Aperta, with Aldo Fabrizi. Fellini took also part in writing another of Rossellini's movies: Paisà. He wrote also for other directors as Alberto Lattuada, Pietro Germi and Luigi Comencini.

All content from Kiddle encyclopedia articles (including the article images and facts) can be freely used under Attribution-ShareAlike license, unless stated otherwise. Cite this article:
Federico Fellini Facts for Kids. Kiddle Encyclopedia.